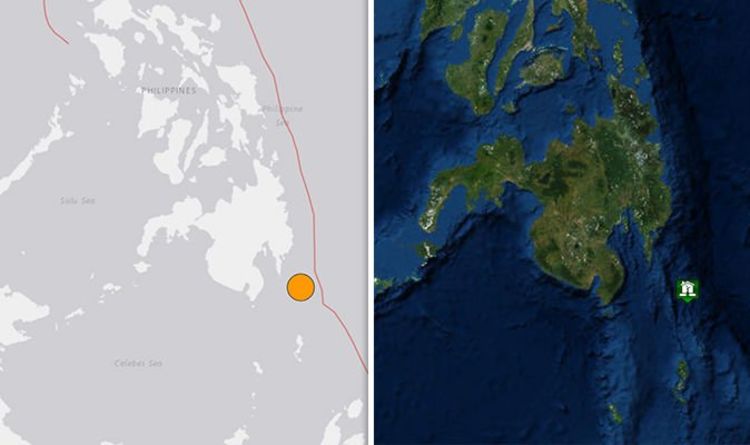 The US based National Weather Service issued a tsunami warning for the Philippines and Indonesia. It states that tsunami waves of up to 30cm should be expected on the coastlines nearest to the earthquake. An earlier NWS notice said tsunamis could occur on coasts up to 300 kilometres from the earthquake’s centre.

The Philippine Institute of Volcanology and Seismology warned: “Minor sea level disturbances such as strong currents and rapid rise and fall of seawaters are expected.

“The concerned public is advised to be on alert for unusual waves.”

The institute urges locals to move away from the shoreline.

Those already at sea in boats are urged to remain offshore in deep water and await further advice.

Tsunami waves are expected to hit between 12pm and 2pm local time (4pm and 6pm GMT).

The earthquake epicentre was located to the south-east of Mindanao island, in the south Philippines.

According to the US Geological Survey it struck at a depth of 60 kilometres (37 miles).

There are no reports of casualties or damage so far.

Australia’s Bureau of Meteorology has confirmed there is no tsunami risk to the country.

At least 429 people were killed earlier this month in Indonesia when a tsunami was triggered by the eruption of the Anak Krakatau volcano.

The eruption caused an undersea landslide, which in turn produced the tsunami.