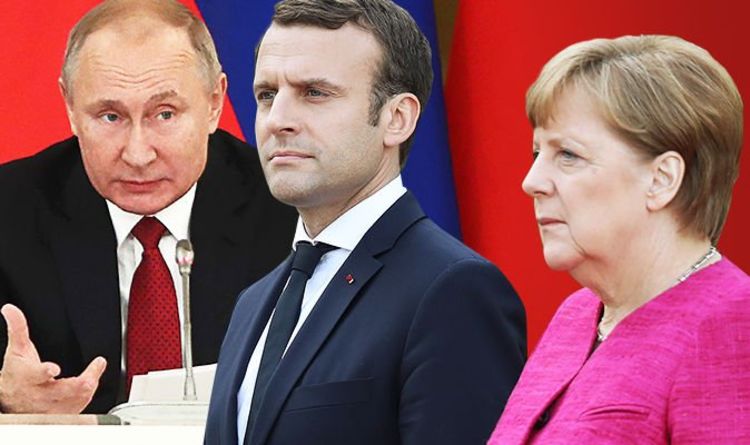 The Kremlin lashed out at Angela Merkel and Emmanuel Macron, who yesterday asked Russia to release the Ukrainian sailors captured along with their ships in the Kerch Strait, which links the Black Sea with the Azov Sea. Moscow’s Foreign Ministry rejected in a statement the requests made by Berlin and Paris branding them “unacceptable”. And a Kremlin spokesman added Mr Putin had privately discussed the issue with Mrs Merkel, taking her position into account.

However, the spokesman added, the Russian President will act in accordance with his own country’s law.

The sailors, accused of illegally crossing the Russian border, have been held by Moscow since November 25, when the international incident took place.

On the same day, Russia also seized the Ukrainian small gunboats and one tugboat carrying the sailors.

Russia, in turn, accused Ukraine of plotting with the West to trigger a crisis.

Yesterday Mrs Merkel and Mr Macron said in a joint statement: “We demand safe, free and unimpeded transit for all ships through the Kerch Strait and the immediate and unconditional release of all illegally detained Ukrainian seafarer.

“They too should be able to celebrate the upcoming festivities with their families.”

The two leaders have already previously condemned also Russia’s invasion of Crimea in 2014, and have since refused to accept it.

The statement added: “The human rights situation in Crimea, which was annexed by Russia in violation of international law, and the use of military force by Russia in the Straits of Kerch and abusive controls in the Sea of Azov are also a source of great concern to us.”

The demands had already been mocked by Russia’s parliament on Friday, hours after they were issued.

Speaker of Russia’s State Duma lower parliament house Vyacheslav Volodin hit out at the French and German leaders, saying they should first look into the use of force carried out within their borders before calling out other Governments.

“They should have expressed their concern over the human rights situation in Crimea before the 2014 referendum when the Ukrainian authorities banned the teaching of children in their native language.

“Today, such a right is guaranteed in Crimea. Three languages – Russia, Ukrainian and Crimean Tatar – enjoy the status of a state language.

“Nothing of the kind was done over the 23 years of Crimea’s being part of Ukraine.”

US election: 'Our kids died in the Parkland shooting, but we disagree on guns'

Strictly Come Dancing leaderboard: Who is at the top of the Strictly leaderboard?