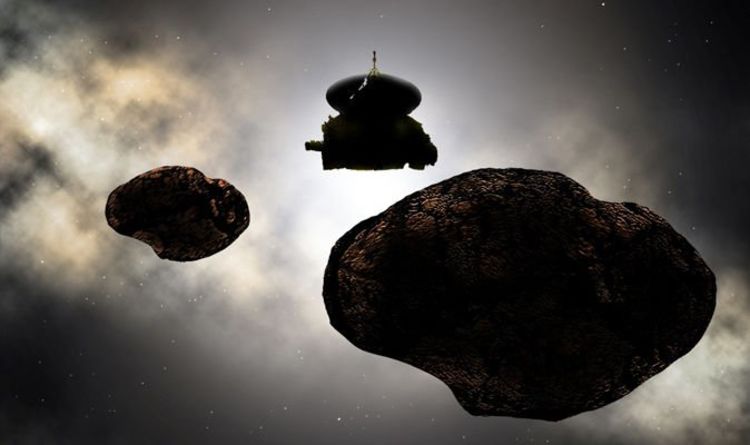 NASA’s New Horizons robot probe will explore an object at the edge of the solar system on New Year’s Day, making it the most distant ever examined. Ultima Thule is a enigmatic trans-Neptunian object found five billion miles from Earth in the Kuiper Belt region. And NASA scientists have “no idea” what to expect when they launch a probe on the mystery dwarf planet.

The New Horizons probe will photograph the extraterrestrial object during a flyby in an attempt to better understand the outer reaches of the Milky Way.

And NASA scientists have “no idea” what secrets the mysterious 20 mile-wide reddish space rock holds.

“To me, that is what’s most exciting—this is pure exploration and fundamental science.”

Data collected by New Horizons will disclose Ultima Thule’s shape, composition, temperature and whether it is, in fact two objects.

And readings will also reveal whether Ultima Thule has an atmosphere, vital for life.

Dr Stern said: “In the space of one 72-hour period, Ultima will be transformed from a pinpoint of light — a dot in the distance — to a fully explored world.

“It should be breathtaking.”

The New Horizons flyby live stream kicked off on Friday, December 28 and will continue through to the New Year.

The live stream will be available online via NASA TV, NASA.gov and NASA’s round-the-clock YouTube broadcasting.

NASA’s New Horizons launched in 2006 in a bid to probe Pluto’s surface.

NASA selected the Kuiper Belt, a “twilight zone” stretching beyond the planet Neptune.

The distances involved are so huge that transmitted data takes two days to reach to Earth.

“We expect to have an image with almost 10,000 pixels on Ultima ready for release on January 2,” Dr Stern said.

“By that first week of January we expect to have even better images and a good idea of whether Ultima has satellites, rings or an atmosphere.”

Deputy NASA New Horizons scientist Dr Cathy Olkin said: “From Ultima’s orbit, we know that it is the most primordial object ever explored.

“I’m excited to see the surface features of this small world.”

Daylight-saving time ends on Sunday, November 1 — here's why we have it and why some countries and states have gotten rid of it

Did This Building Grow a Beard? Nope. Those Are Legs.

Scientists develop a coating for socks that cures smelly feet

The International Space Station has housed people for 20 years. From elusive air leaks to 3,000 experiments, here's how the $150 billion project has...