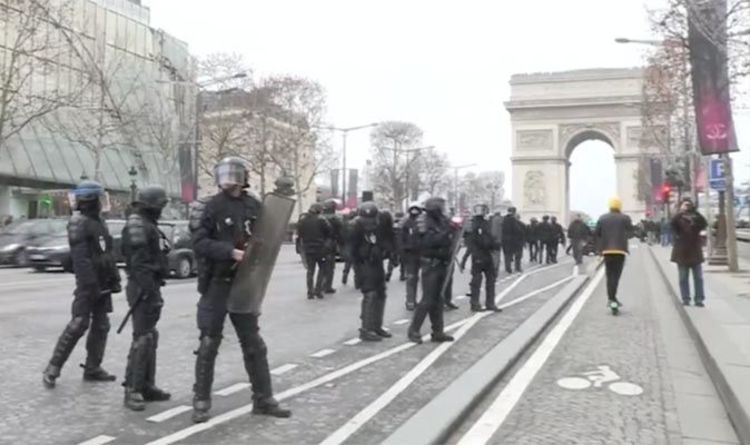 On what has been dubbed the seventh act of the yellow vest protesters, demonstrators fed up with Emmanuel Macron’s policies are taking their rage to the streets of Paris and other cities. But thousands of police officers are ready to face them once again, after they clashed multiple times during the past weeks when the protests turned violent. While the biggest march is expected to take place in central Paris, turmoil has already been registered in Rouen, where officers launched tear gas against protesters after they were confronted with missiles, according to reports.

A blood-chilling video shared on Twitter shows demonstrators fleeing the scene after the tear gas is unleashed.

French journalist, Simon Louvet, tweeted: “The GJ are in the streets around Jeanne D’Arc Street and are gassed, they flee running and regroup.”

Some of the yellow vest protesters, who were named after the fluorescent jackets French motorists must have in their car, have also set up a barricade using bins.

The journalist continued: “New barricades are put in place with fire bins. The cordon of the Gendarmerie remains at a distance.

“The cord stabilizes at the crossroads of the station, the yellow waistcoats are Rue Jeanne d’arc.

“The bulk of the procession is back, at the crossroads with Lecanuet Street. Could not give a number but hundreds, less than 1000.”

But clashes could also take place in central Paris as yellow vest demonstrators have gathered on the Champs Elysee, which have been the theatre of violence in the past weeks.

Earlier this month, while Mr Macron was attending the G20 in Argentina, demonstrators took the iconic Arc de Triomphe by storm, writing “the vests will triumph” with spray paint on one of its side.

The ongoing protests, which started on November 17, are a result of a stark discontent across the country over the rising cost of living in the country.

They were triggered by the announced fuel tax hike, set to take place in January 2019.

But earlier this week Mr Macron announced he will cancel the fuel tax increase, despite having defended it for weeks, and added he will increase the minimum wage by £89.84 (€100) a month from January.

He also said he will reduce taxes for pensioners in difficult economic conditions.