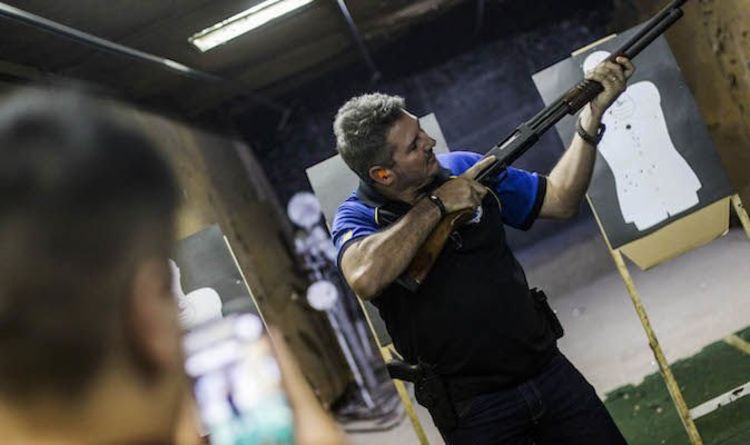 Mr Bolsonaro won the Brazilian elections in 2018 with an anti-corruption, anti-immigration stance that has drawn comparisons to US President Donald Trump. The Brazilian president-elect – who takes office on January 1 2019 – turned heads when he branded parts of France to be unliveable as he took aim at French migrants heading into the South American country. But on Saturday, the far-right politician announced plans to issue a decree allowing all Brazilians without criminal records the right to bear arms.

The announcement comes as welcome news to Bolsonaro supporters who want the hard-line president-elect to loosen the country’s strict gun laws.

That message appealed to many Brazilians who want to use guns for self-defence amid sky-high levels of violent crime throughout the country.

Taking to twitter on Saturday, Mr Bolsnaro declared: “By decree, we plan to guarantee the ownership of firearms by citizens without criminal records.”

He did not provide additional details and it was not immediately clear what mechanisms Bolsonaro would have at his disposal to carry out such a decree.

It was also unclear what specific measures the decree would contain.

Gun manufacturers are among those that stand to benefit from such moves.

Shares in Brazilian gun maker Taurus Armas SA have climbed 88 percent in the last year, amid expectations that Bolsonaro would win the election and follow through on promises to liberalise gun laws.

Mr Bolsonaro is also following in Mr Trump’s footsteps by continuing with plans to move the country’s embassy from Tel Aviv to Jerusalem.

US President Donald Trump  announced in February the US would move their embassy and recognise Jerusalem as the capital.

How the oil industry made us doubt climate change

A happy ending after homeless woman's story featured on TV