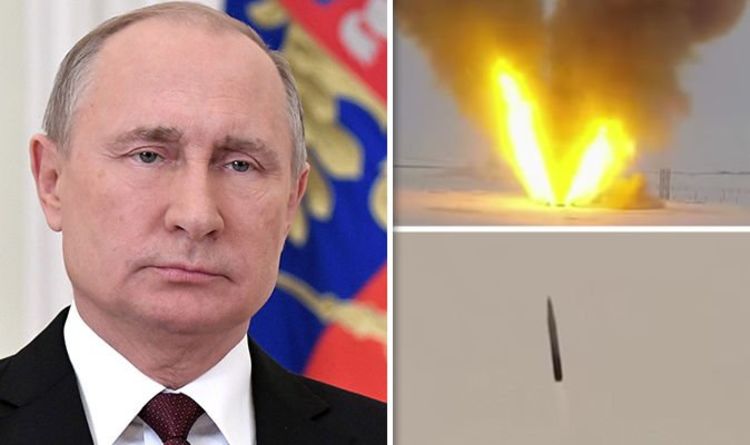 Russian President Vladimir Putin has described the first-ever glimpse of the secretive hypersonic Avangard nuclear-capable missile as a “New Year’s gift” to the Russian people. In footage released by the Kremlin, the Russian leader can be seen watching the successful test launch of the new missile that could evade US defences. The missile, set to be deployed within just a few months, will dramatically escalate the tense high-tech nuclear arms race with Washington.

This raises the prospect of the outbreak of a global conflict next year, since the announcements makes the West vulnerable to nuclear attack by the Kremlin.

The missile can strike targets thousands of miles away and could render all current missile defense systems obsolete.

The Avangard system uses an intercontinental ballistic missile (ICBM) and a hypersonic glide vehicle to travel at 20 times the speed of sound.

When the missile closes in on its target, it can adjust both altitude and direction to avoid defenses and fly low enough to avoid most interceptors.

The test took place in the Russia’s far eastern region at the Kura Missile Test range.

He told a government meeting: “This test, which has just finished, ended with complete success.

“From next year, 2019, Russia’s armed forces will get the new intercontinental strategic system Avangard.

“The Avangard is invulnerable to intercept by any existing and prospective missile defense means of the potential adversary.

“This will reliably ensure the security of our state and of our people for decades to come.

“This is a wonderful, excellent gift for the country for the New Year.”

5 things to watch in the 2020 campaign's final week

Coronavirus Germany: Plans for 'lockdown light' amid surge in infections

Voter intimidation is illegal. What counts and what to do if you see it at the election polls