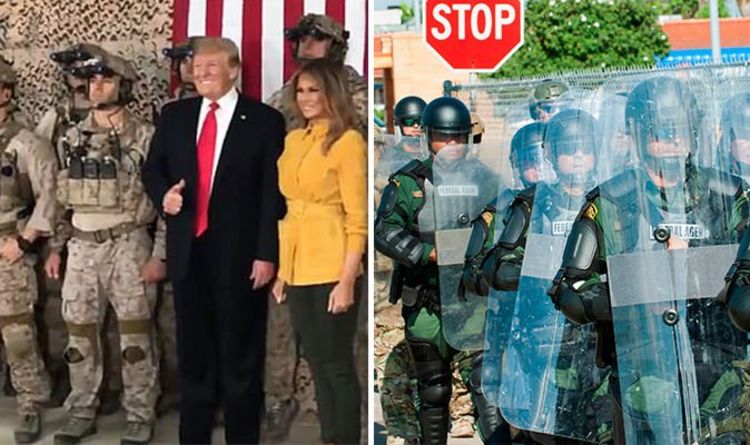 US President Donald Trump has come criticism after appearing to accidentally reveal top-secret US military intelligence during his visit to an army air base in Iraq yesterday. To celebrate his first visit to a combat zone during his presidency, the US leader posted a video of him posing for photographs with several groups of soldiers. However, experts noticed that details of this video could put the US SEAL team in danger amid concern that President Trump revealed top-secret information.

In the clip, the President and First Lady met with troops, posed for selfies, and signed autographs at the The Al Asad Air Base.

But, the jeopardizing video, uploaded onto Twitter, also showed the President and First Lady Melania Trump posing for photographs with members of the Navy SEAL Team Five.

Current and former Pentagon officials have since admitted that revealing the location of a deployment of SEAL Team Five violates operational security.

The faces of the soldiers were not blurred, which is customary for elite troops in special forces units.

The footage revealed the identities of this covert team of elite soldiers, who were wearing full battle gear and special night vision goggles.

According to Newsweek, Pentagon sources are outraged by the leaked details of which SEAL team is present in the Middle East.

Malcolm Nance, a former U.S. Navy intelligence specialist who has experience in Iraq, said: “Operational security is the most important aspect of personnel deployments

“The real names, faces, and identities, of personnel involved in special operations or activities, are usually a closely held secret in a combat zone.

“Revealing them casually, through an unusual media exposure even if it’s the commander in chief, would prove a propaganda boom if any of this personnel are detained by a hostile government or captured by a terrorist group.

“There would be no denying who you are and what you do.”

A Defence Department official added: “Even during special operation demonstrations for congressional delegations or for the president or vice president, personnel either have their faces covered or their face is digitally blurred prior to a release to the general public.

During a bombastic speech to the troops in Iraq, President Trump told them that the US was no longer “the suckers” to the world.

How Did a Film by a Shady Anti-Porn Group With Trump Ties End Up on Netflix?

Trump supporters and counter-protesters clash during MAGA march through Manhattan

China extends deal with Vatican on bishops by two years