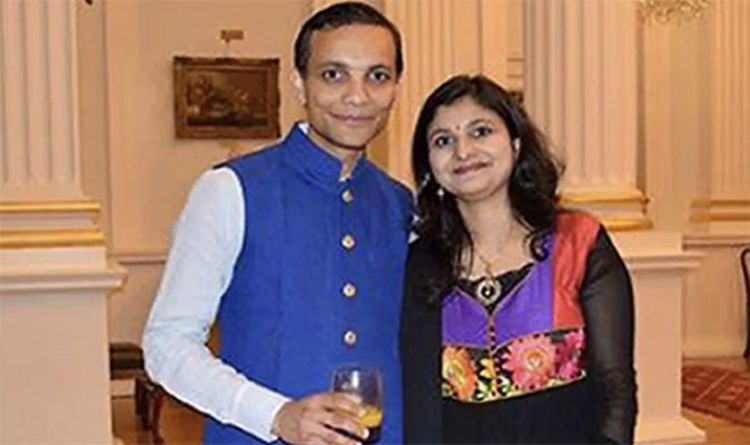 Sisters-in-law Rajshree Laturia and Khushboo Laturia, both aged in their 30s, were travelling with their husbands, who are critically injured after the tragedy and were airlifted to hospital, along with two other children, aged seven and nine. The Toyota Land Cruiser in which they were travelling crashed through a railing on the bridge in the south of the country just before dawn yesterday, falling 26 feet on to a riverbank. The two women, both of whom are British citizens of Indian descent, lived in London with their families.

An Indian embassy official in Iceland was unable to confirm their names officially, but told The Guardian he understood the information to be correct.

Financiers Shreeraj and Rajshree Laturia were included on a list of Asian power couples in 2015.

According to Shreeraj’s LinkedIn page, he spent eight years at UBS Investment Bank as a portfolio manager and trader from 2006 until 2014 before joining RBC Capital Markets as a trader in 2015.

Another brother, Sarvesh Laturia, told the Times of India: “It was my two brothers and their wives, they are British people.

“They were on vacation in Iceland and their car met with an accident in which my two sister-in-laws passed away and my niece passed away. My two brothers are in a critical condition in hospital.”

The crash happened on a ring road between the town of Kirkjubæjarklaustur and Skaftafell, part of Vatnajökull national park.

Adolf Erlingsson, a tour guide who was among the first on the scene, said afterwards: “Somehow the driver must have lost control of the car and it just went through the railing and crashed down onto the bank. It’s kind of sandy. It flipped over and was totally destroyed.

“Just before I arrived I was overtaken by a police car then when i got there there were two police cars and I got out of my van and went to see if I could help. There were just two police officers and me to begin with.

“We tried to assess thew situation and see who was alive and who could help.

“When I got there four people were out of the car, one of them deceased, and there were three people trapped in the car. I think two of them were deceased.

“Outside of the car the was one adult and two children semi-conscious.

“I talked a little bit to them. I tried to talk to the driver, calm him down, he was trapped inside the car. I said save your energy and we will try to get him out of there.”

Local police said on Friday: “The individuals involved in a traffic accident at Núpsvötn yesterday are all British citizens. The individuals were two brothers travelling around Iceland with their families. The deceased were two women born in 1979 and 1980 and an infant born in 2018.

“The cause of the accident is unknown and under investigation by the police and the investigative committee for transport accidents. It is clear that the car was driven past the cameras at Hvolsvöllur early that same morning.

“The car was driven to the east, along the Sudurlandsvegur road, and seems to have turned on the bridge with the result that it went on top of the railing of the bridge, to the right, following it for a short distance and then turned over off the rail and the bridge. There, the car fell down on the ground beneath the bridge.”

The bridge, built in 1973, is one of the longest in Iceland. It was not thought to have been especially icy but humidity may have made its steel surface slippy.

A statement issued by the family said: “The fatal car crash near Skaftafell in Iceland on the morning of December 27, 2018 has come as a horrifying shock for the entire family and friends.

“The Indian, British and Icelandic authorities have been extremely cooperative and extended appropriate support.

“Our family is deeply saddened so we request you to kindly respect our privacy and give us the space to grieve in peace at this difficult time.

“Special thanks to the local authorities for airlifting and ensuring timely medical facilities were provided.

“Thank you for your prayers and understanding on this matter.”

New change to stimulus check qualifications? What two different proposals may mean for you