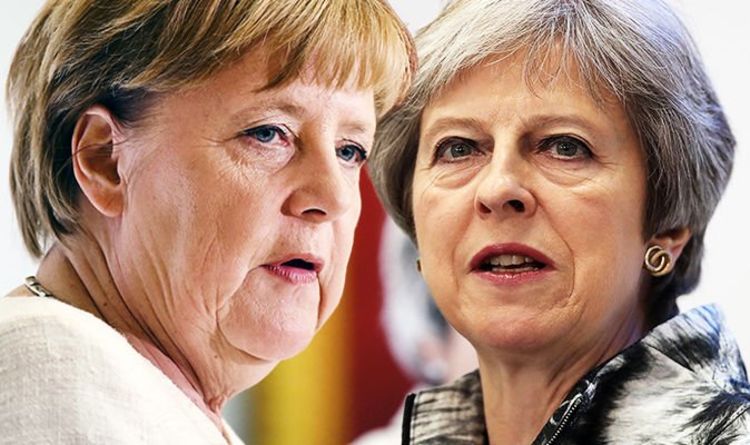 The United Kingdom’s European Union divorce is the most “urgent problem” Germany faces, said Holger Bingmann, the president of the foreign trade association BGA. Compatriot Dieter Kempf, the federation of German industry president, warned that Brexit poses as bid a threat to the economy as the global trade conflicts fuelled by Mr Trump, the US President. He added: “The British economy would b exposed to immediate risks of recession that would not go unnoticed by Germany.”

Britain is struggling to sign-off the 585-page Brexit withdrawal deal agreed between Theresa May and the remaining 27 EU leaders in Brussels, last November.

The Prime Minister was forced to delay a vote by MPs on the deal as her agreement faced defeat by a “significant measure”.

But now German industry is fearful that Brexit could have a significant impact on its own economy unless the effects are properly mitigated.

Mr Bingmann claims Brexit is the “most urgent problem for the german economy”.

“And it is simply completely unclear how the drama ends,” he complains.

Ingo Kramer, President of the Confederation of German Employers’ Associations, fears for the future of the EU in its current state as a result of Brexit.

“Brexit should never become a thing, but must remain a singular event in EU history,” he said.

But the focus on Mr Trump’s trade policy isn’t going unnoticed by German businesses, who fear the long-term results may have wider implications for Europe.

The United States is one of Germany’s largest trading partners. Berlin enjoys a £22.02 billion trade surplus with Washington.

He said: “The biggest danger is certainly Trump’s trade policy.

Mr Kramer added: “What we need is patience and diplomacy.”

Mr Kempf said: “A further escalation of US trade disputes with China and the EU threatens to significantly impact production, trade and economy development in the medium term.”

“The tariffs are far from being off the table,” he said.

Antony Gardener, a former US ambassador to the EU, warned the trade war between Brussels and Washington will deepen unless the World Trade Organisation reforms.

Speaking to Fox Business, Mr Gardner claimed Mr Trump should be “helping the European Union” and avoid siding with Russia in the WTO case on Russia’s involvement in the Crimea crisis.

He warned without a reform of the WTO rules on national security exemptions proposed by the Brussels bloc, rogue states like Russia and Saudi Arabia could get away with trade decisions unable to be challenged by the organisation’s bosses.

He said: “I’m extremely pessimistic about this for a whole bunch of reasons.

“The EU has tabled a very detailed proposal about how to reform the World Trade Organisation.

“There’s been no engagement from this administration on that paper.

“And there’s 90 percent overlap in our interests on what we should do to make that organisation more effective.

“We should be working with the European Union rather than pointing a gun to its head to address the issues of technology transfer, and we’re not doing that.

“I could just give you two examples here of how this has real consequences for business.

“We’re joining Russia in a WTO case right now with regard to the measures it took against Ukraine during the Crimea crisis, in which Russia says we have a national security exemption and if we invoke that judges cannot rule on the case.

“Saudi Arabia is the same thing in its efforts to embargo Qatar where we are taking the side of Saudi Arabia saying you have the right to invoke national security and there’s no right for judges under trade rules to decide.

“If that happens, we’re in the law of the jungle.”