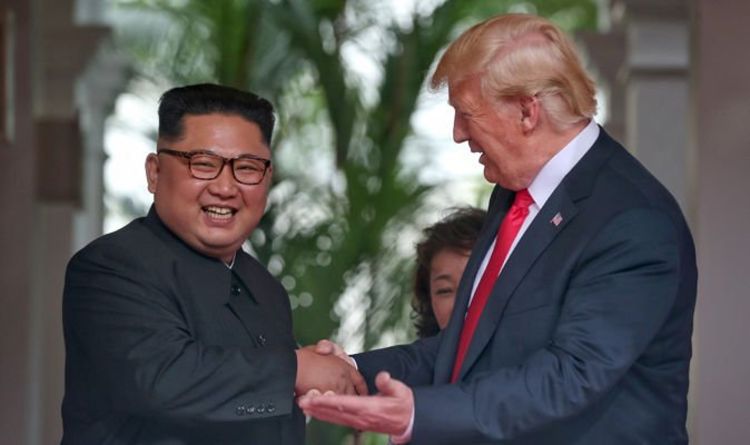 George Toloraya, director of Korean Programs at the Institute of Economy at the Russian Academy of Science, made his remarks in an article published on the website of North Korean analysis website 38 North. Mr Toloraya, a former diplomat who served as Russian Consul-General in Australia until 2006, said: “The US has allowed an unrealistic goal—complete, verifiable, and irreversible denuclearisation (CVID) to drive its diplomatic engagement with North Korea. “It has compounded this problem by using ineffective tactics to achieve this goal. Unless the Trump administration abandons this concept and its quixotic campaign of “maximum pressure” in favor of conditional, reciprocal, incremental denuclearisation (CRID – a term, suggested by Chinese), the negotiating deadlock with North Korea will likely persist and with it, a possible return to crises and confrontation looms.”

Mr Toloraya described as a “myth” the idea that pressure and sanctions were what “brought North Koreans to the negotiations table”, and that eventually such tactics would result in PyongYang capitulating and giving up its nuclear weapons.

He said: “Nothing can be further from the truth.

“King Jong-un, in fact, held the upper hand in late 2017, after he appeared to acquire the capability to threaten US territory directly with an intercontinental ballistic missile (ICMB).

“As a result, Kim believes that negotiations with the Trump administration should now be conducted on the basis of “equality”.

As a result, Mr Toloraya said, the idea of “denuclearisation first, rewards after” which underpins the Trump strategy “is and will remain a non-starter”.

He warned sanctions were of little use in bringing about change in North Korea, adding: “North Korea’s recent threat to restart “building up nuclear forces” if the US didn’t ease sanctions should not be taken lightly.

Rather than pursue a policy of CVID, Mr Toloraya suggested the US instead push CRID, which he described as “proceeding in incremental steps undertaken by the DPRK in sync with US steps”.

He added: If the US and North Korea cannot find a way to CRID, the world should brace itself for a new cycle of tensions, threats, and crises.

“However, as war is not a solution, sooner or later the sides will have to get back to diplomacy.

“But the stakes might become higher: Kim Jong Un may in the meantime improve its WMD capability and become more mistrustful and less inclined to compromise.

“The window of opportunity for diplomacy with the DPRK in a constructive way may close soon.

“For example, if large scale US-ROK military exercises are restarted, they could cause a disproportional reaction from North Korea, such as resuming missile tests.

“The best possible remedy that can be suggested is the exercise of political will on the side of President Trump – despite all the controversies around him – to suggest a new phased approach to solving the North Korean nuclear program that is based on reciprocity.

“Trump has already exercised enormous political courage in agreeing to the Singapore Summit in the first place, continuing to be unconventional to maximize this opportunity would not only benefit his legacy, but could create important momentum for improving the security situation in Northeast Asia along the way.”

Don't Ignore The Good News On Covid-19 From Asia

Boy, 16, is shot dead by cops after knife attack on police officer in Russia

Why you probably aren't as moral as you think you are