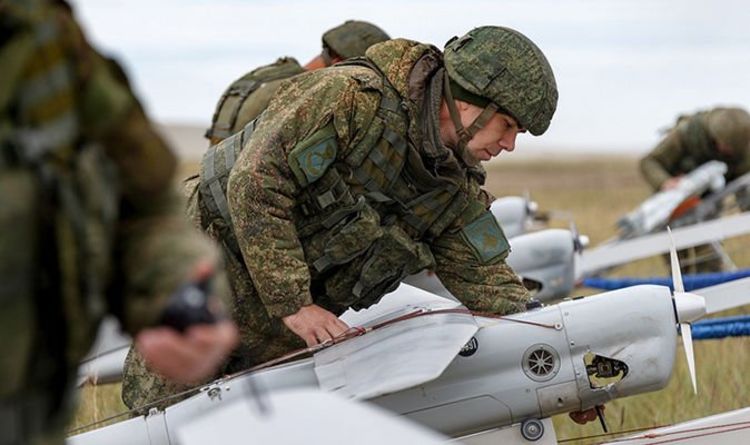 The Adyutant allows troops to practise repelling attacks by unmanned aerial vehicles (UAVs). Two soldiers can each fire up to six targets to simulate a swarm of drones for gunners to blow out of the sky. It comes after rogue drones sparked chaos at Gatwick Airport, cancelling hundreds of flights and causing Christmas misery for more than 140,000 fliers.

And in October, Russia accused the US military of launching a drone attack on its bases in Syria.

Thirteen drones were “taken control of” by a US intelligence plane and tried to attack Russian military, Moscow claims.

The new state-of-the-art Adyutant system has been developed by Russian weapons manufacturers Kupol.

A Kupol spokesman said: ”The specific feature [of the Adyutant system that simulates a ‘swarm’ of drones] is that under the control of one ground-based command post, two operators can simultaneously launch up to six air targets and operate them in the single field.

“That is, we create a target ‘swarm’ consisting of various types of targets.

“Some fly low, others fly high, quickly or slowly and so on.

“This helps create the effect of a situation maximally close to a real combat.”

Russia has recently been practising an anti-naval missile system in the Arctic.

Tor short-range surface-to-air missile systems, developed by the Soviet Union, are used to shoot down aircraft, helicopters, UAvs and missiles.

But engineers found the training simulator also worked for other weapons systems, including the drone practice simulator.

A spokesman added: “When we got the result, we realised that this system is useful not only for the Tor.

“It is necessary for all the systems, from shoulder-fired air defence weapons to short- and medium-range complex.

“Recently we practiced using it as a simulator for long-range systems in the close-in destruction area.”

Liverpool, site of last surrender in US Civil War, grapples with its Confederate links

American woman, 23, found tortured in Mexico with all of her teeth removed

Highlights from first night of 2020 DNC