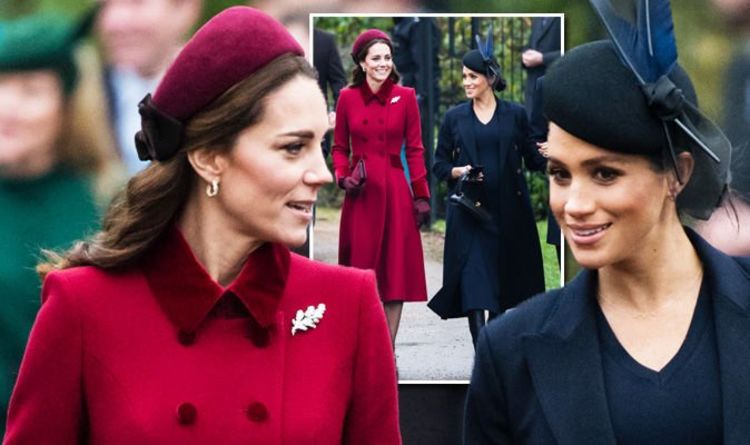 Meghan Markle and Kate Middleton’s rift rumours have been rumbling on.

But, what did the royal’s outfits say about the two women now?

Melita Latham, a stylist, fashion designer, and owner of luxury travel brand Melita Latham London, revealed how the two women revealed much about their relationship with their style.

She said that Meghan looks “more comfortable in these surroundings than Kate.”

Melita explained: “This year, officially a member of the royal family and with a royal baby on the way, Meghan is completely different to her appearance last year.

“What a contrast to this year. Meghan looks far more comfortable.

“Indeed she appears to be more comfortable in these surroundings than Kate, but then Meghan has spent most of her live under the limelight.”

She revealed that Meghan’s look from the former Spice Girls designer was “perfect”.

“In choosing her VB ensemble, Meghan has succeeded in showing that she can exist as herself within the bubble, but also she has arrived at a rather formal occasion, looking appropriate but also at ease and casual,” Melita said.

Meghan Markle and Kate Middleton’s body language on the day was analysed by an expert.

Following their arrival, body language expert Judi James shared her thoughts on their behaviour – revealing she had picked up on some “emphatic” public displays of affection.

She said: “Back before rumours of rifts had hit the headlines, Kate walked holding her husband’s hand and there was a relaxed-looking but more subtle air of cheeriness about the line-up.

“This year we have the four walking together wearing slightly rigid or forced-looking smiles for the cameras, and Kate walking with a larger spatial gap between herself and her husband in order to imply closeness by moving across towards Meghan.”

iPhone 12: Apple has fixed the biggest issue with every phone you've ever owned

People Are Planning to Dress as Postal Workers for Halloween

Heart attack: Is your tongue a certain colour? Peculiar sign warning of condition

Coronavirus test: Oxford University develops NEW COVID-19 test – When can you get one?

An additional 75,000 Americans may have died in the spring and summer because of COVID-19, a new study found