This op-ed originally appeared in the Dec. 3, 2018 issue of SpaceNews magazine.

In recent years, there has been a boom of announcements for satellite constellations comprising satellites weighing as little as 3 kilograms to address a growing market of machine-to-machine (M2M) and Internet of Things (IoT) via satellite. Traditionally, this market has been serviced through combinations of Ku-band Very Small Aperture Terminals (VSATs), and mobile satellite services (MSS) including Orbcomm and Globalstar. NSR found that at end of 2017, there were approximately 3.5 million in-service MSS/ VSAT terminals addressing this need, and this total will grow to approximately 6.3 million in 2027.

Funding for these new constellations has increased significantly, including $15 million for Myriota, $4 million for Astrocast, $5 million for Kepler Communications, and more. The assumption for funding is based on the premise that 10s, 100s or 1,000s of millions of devices will become internet-connected over the coming decades, terrestrial networks only cover around 10 percent of the Earth’s surface, and there will be enormous demand for anywhere-on-Earth connectivity for low cost — so low a cost that one might as well deploy a terminal for satcom connectivity on virtually anything that moves.

With that said, the main unique value proposition of smallsat IoT constellations is the single global network, low cost, and IoT connectivity outside of cellular coverage. However, the proportion of devices that need to be connected outside of the footprint of terrestrial networks is limited. Use cases that fit into this category exist in the maritime sector, including fishing aggregation devices, buoys, fishing and recreational vessels. New types of use cases may also be attracted to smallsat IoT services, including connected life jackets for instance, or find-my-device functionality, similar to services that many mobile phones sold today feature. Transportation use cases – where vehicles and trucks move in and out of terrestrial networks, are also excellent candidates for smallsat IoT services. Agriculture, civil government, and energy markets can also use such low-cost services for remote, but non-critical, applications. 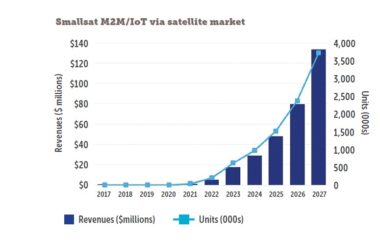 Pricing is a key consideration for demand, so the question begs: just how low could pricing get? Hiber expects to offer its services beginning at just a few euros per year. Other constellations expect $1 per month plus terminals costing around $40. However, NSR expects the entry-level pricing of this business model to be a loss leader, as if all customers were on this lowest plan, operational expenditure costs for constellation replenishment alone, which is in the order of $3 million to $8 million, won’t be covered. The model is to attract customers with low cost, one-data-packet-per-day services, and then upsell to more frequent (and for most applications, significantly more valuable) use cases, and additional value-added services – a feasible proposition.

However, this field is rife with competition. Not only are the smallsat constellations vying for market share, but there is also established MSS/Ku-band service available plus GSM/5G cellular and Low Power Wide Area (LPWA) terrestrial networks. These networks, such as Sigfox and LoRa, are specifically designed for low-cost IoT services, with payloads limited to around 12 bytes. This provides the main form of competition, with similar price points and value proposition offered. When LPWA networks are available, customers are unlikely to choose smallsat satcom solutions.

One key reason is because on LPWA networks, terminals can be lower in price – around $20 — and have lower servicing cost. Sigfox charges between 1 euro and 14 euros per year, depending on the number of messages sent. Sometimes one year of free service is also included, although many of these accounts won’t be renewed. More benefits include the fact that up to 140 messages can be sent per day, and it also has a service-level guarantee that 98 percent of data latency is under 60 seconds (although is typically under 45 seconds). By comparison, in the early phase of smallsat IoT launch, latency exceeds 20 hours due to only having 1-2 satellites in a single plane. Although, at full launch, latency can decline below 20 minutes depending on the constellation.

Due to the reasons outlined above, NSR expects smallsat IoT to primarily become the network of last resort and will therefore take many years to begin turning a profit. After all, with the above price points, millions of devices will be required to relay data every month for this to happen. Further, reliability, antenna performance, and value-chain infrastructure and not yet ready for deployment – this will take some years to iron out. For real, critical demand of industry, cargo tracking, government, military and energy, larger satellites, which are already deployed, will be primarily relied upon from both MSS and VSAT networks.

Because NSR forecasts only approximately 3.7 million smallsat M2M/IoT in-service connections by 2027, due in part to the extremely high levels of competition and inevitable launch delays, this means there is limited opportunity for four constellations to succeed, let alone 10 or more. The result is most constellations currently proposed will either merge, never launch, or change system architecture to provide more than the most basic IoT services, to generate enough low average-revenue-per-user income to cover launch, renewal, service and maintenance costs.

The competitive M2M and IoT space is heating up, with many new entrants vying for a potentially large terrestrial IoT market, and a relatively small satcom market. These constellations will have a role to play in the overall IoT ecosystem; however, they will have to compete with better options in terms of pricing, latency and bandwidth. The sole advantage remains availability (and pricing compared to MSS networks) Thus, the fact that terrestrial solutions will meet most customer needs, combined with limited demand outside of said footprints, will result in uncertain times ahead for smallsat IoT operators and investors.

Alan Crisp is a senior analyst at NSR Hong Kong and a member of the research and consulting firm’s Fixed Satellite Services Group. He is the co-author of NSR’s annual M2M and IoT via Satellite Report.

Japan seeks to finalize agreement with the U.S. on lunar exploration cooperation

U.S. Space Force says its new seal is not a Starfleet knockoff

January 27, 2020
As the Jonas Brothers performed on stage, their beautiful wives took their seats in the audience to watch the show.Priyanka was joined by Kevin’s...