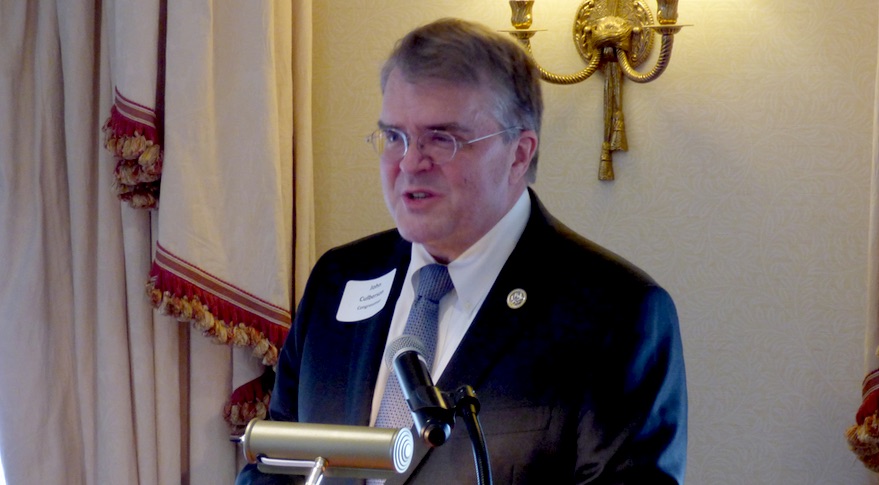 WASHINGTON — With a two-week extension of the stopgap spending bill funding much of the federal government enacted, the outgoing chairman of the House appropriations subcommittee that funds NASA says he’s hopeful to get a final spending bill approved before that bill expires.

President Trump signed into law Dec. 7 a bill that extends for two weeks the continuing resolution (CR) funding most of the federal government, with the exception of the Defense Department and several other agencies that already have fiscal year 2019 spending bills approved. The new CR funds the government through Dec. 21.

The previous CR was set to expire Dec. 7, leading to concerns a week ago about the threat of a government shutdown. Congress and the White House, though, agreed to an extension because of the funeral ceremonies this week for former President George H.W. Bush, which limited legislative activities.

House and Senate appropriators, along with the White House, still have to resolve a number of major issues with the remaining appropriations bills, such as border security funding. However, Rep. John Culberson (R-Texas), chairman of the commerce, justice and science (CJS) appropriations subcommittee, said he was optimistic they could reach agreement on a final bill.

“It looks very promising,” he said in an interview after a Space Transportation Association luncheon here Dec. 7. “I’m very encouraged and optimistic that we’re going to get it done.”

Culberson said he believed Congress would approve a full-fledged appropriations bill for fiscal year 2019, which started Oct. 1, rather than a CR that funded agencies at 2018 levels through September 2019. That full-year CR has been proposed as one option if Congress can’t reach agreement on a 2019 appropriations bill.

A full-year CR, however, would not allow agencies to start new programs unless specifically authorized in the bill. For NASA, that could slow down work on some aspects of its exploration plans, such as development of the lunar Gateway.

At a meeting of the NASA Advisory Council’s human exploration and operations committee Dec. 7 at NASA Headquarters, Michele Gates, director for the Power and Propulsion Element (PPE), the first part of the Gateway, said that under an extended CR the agency could continue the ongoing review of proposals submitted by industry last month. NASA expects to issue one or more contracts in March 2019 for construction of the PPE.

However, she said that, under a CR, NASA would not be able to actually fund those PPE awards. Other programs in NASA’s human exploration and operations (HEO) mission directorate would also be affected, she added. “If we’re under a CR for a long time, HEO has other concerns, and there would need to be agency discussions,” she said.

Culberson was at the luncheon to receive the association’s Leadership Award for his service as chairman of the CJS appropriations subcommittee for the last four years. Culberson was defeated last month in his bid for a tenth term in the House.

In his remarks at the luncheon, he sounded a valedictory note. “My goal, as chairman, has been to raise the tide, to lift all boats, so that the entire science and space community can work together in a shared way towards making sure that the American space program is the very best on Earth,” he said. “I’ve come close to achieving that in the four short years I’ve been able to serve as chairman.”

While Culberson worked to increase funding for most NASA programs, he is perhaps best known for his advocacy for missions to Europa, the moon of Jupiter that harbors a liquid water ocean under its icy surface and is considered potentially habitable by many scientists. Culberson added funding above NASA requests for Europa Clipper, a spacecraft that will orbit Jupiter and make multiple close flybys of Europa, and a follow-on lander.

Culberson said in an interview he was optimistic about the future of those missions despite no longer being able to personally secure funding for them. “Sen. Shelby is a strong supporter. The SLS is an essential part of the missions, plural,” he said. Language in the House version of the fiscal year 2019 spending bill requires the use of the Space Launch System for both Europa Clipper and the later lander mission.

He also cited the high ranking a Europa orbiter mission received among flagship-class missions in the most recent planetary science decadal survey. “The scientific community is strongly behind the program,” he said. The decadal survey, though, did not consider a Europa lander mission that many scientists see as more vulnerable to future budget cuts than Europa Clipper, which completed its preliminary design review in August.

“I laid a strong foundation by raising the tide for the entire agency so that there’s no need for competition or jealousy among the different advocacy groups for different missions,” Culberson said of the Europa missions. “So I’m very optimistic. It’s safe.”