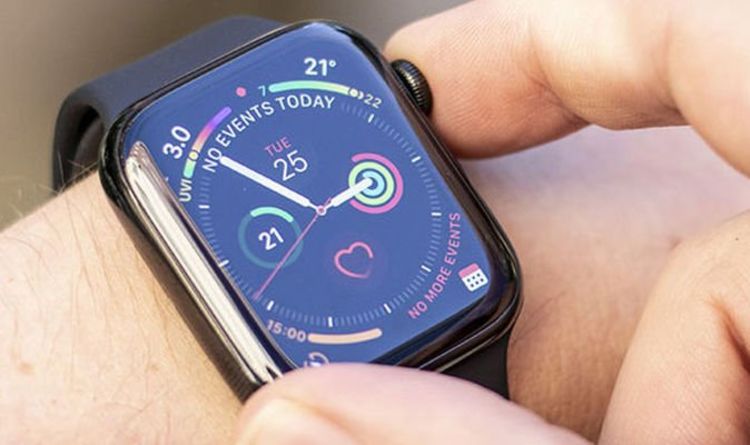 Apple Watch Series 4 radically advanced the product line by reducing bezels, delivering a display that is over 30 percent larger than its predecessor.

The added screen real-estate allowed the device to showcase more information to users at a glance.

But although the hardware introduced a futuristic new aesthetic to users, the device’s headline act was certainly the new health features it brought to the table.

During the unveiling of the Apple Watch Series 4 Apple was keen to discuss the product’s ability to perform an electrocardiogram (ECG) for owners.

“This is the first ECG product offered over the counter directly to consumers.

“An ECG measures the electrical activity of the heartbeat and it’s used by physicians to help diagnose certain heart diseases and other conditions.

“So now you can take an ECG any time, anywhere right from your wrist.

“You just open the app and you put your finger on the Digital Crown.”

While the ECG feature was not initially available when the hardware launched, Apple has now announced it has arrived in the newest version of watchOS 5 that has just been released.

Announcing the software upgrade, Apple stated: “Available today as part of a free update to watchOS 5.1.2, the ECG app1 and irregular heart rhythm notification feature2 will help users identify signs of AFib, the most common form of irregular rhythm.

“When left untreated, AFib is one of the leading conditions that can result in stroke, the second most common cause of death around the world.

“The CDC estimates AFib can affect up to two percent of the younger population and nine percent of those 65 years and older in the US.”

Users will have to use the new ECG app to start the process.

Owners will then have to place their finger on the Series 4’s Digital Crown for 30 seconds in order to get a reading.

Heart rhythms will then be classed into either AFib, sinus rhythm or inconclusive categories.

Once the reading has been completed, it can then be shared in a PDF format and delivered to physicians.

Unfortunately the ECG feature is currently only available in the US and Apple has not stated when it could arrive in other territories.

Netflix to stream Studio Ghibli films… but with one catch – CNET