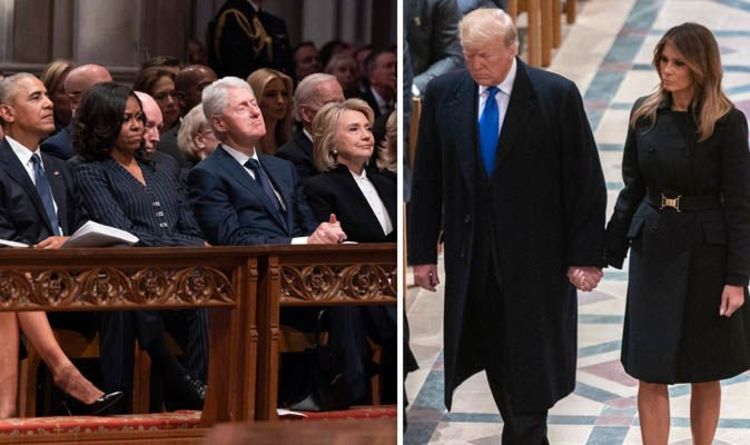 The US President received a cold welcome as he took his place at the Washington National Cathedral ahead of the solemn service honouring the 41st US president, who died aged 94 on Friday. Despite being just two seats away from Mr Trump, Mrs Clinton looked resolutely ahead of her as the presidential couple arrived and sat down. Mr Trump and Melania shared the row with Barack Obama and his wife Michelle, Bill Clinton and his wife and former Secretary of State Hillary and Jimmy Carter and former first lady Rosalynn Carter. While the Obamas shook their hands with the Trumps, the current US president didn’t do the same with the Clintons.

Only his wife Melania shook hands with Bill.

Mr Trump’s right hand man, US Vice President Mike Pence, was on the other hand greeted by both the Obamas and the Clintons, who briefly spoke to him before he took his seat in the row behind them.

This was the first time the Trumps and the Clintons gathered together in public since the inauguration of the Trump administration in January 2017.

Their relationship was exacerbated by the attacks launched against each other, and Mr Trump’s pressure to “lock her up” following a scandal which saw Mrs Clinton using her private emails for public office’s purposes.

Following their arrivals, the former presidents and their wives awaited for the casket in what looked like a tense silence.

George W Bush, one of the former president’s six children and 43rd US president, shook hands with all the leaders before seating across the aisle with his family.

Mr Bush later paid an emotional tribute to his father during his eulogy, describing him a “noble man”.

And, praising him as a father, he added the late president taught him that “public service is noble and necessary”.

He said: ”He accepted failure is part of living a full life, but taught us never to be defined by failure. He showed us how setbacks can strengthen.”

Mr Bush, who broke down in tears at the end of his speech, added: “Through our tears, let us know the blessings of knowing and loving you. A great and noble man, the best father a son or daughter could have.”

However, the two presidents formed an unlikely friendship that saw the two leaders even touring together Indonesia after the region was devastated by a tsunami in 2004.

Their unique relations was described by Nancy Gibbs and Michael Duffy in their book The Presidents’ Club.

It reads: “No relationship is quite like the bond between George H.W. Bush and the man who defeated him in 1992.

“Bush would go so far as to suggest more than once that he might be the father that Clinton had always lacked—a notion that the younger man did not dispute.”

Why I love the Lodge Cast Iron Skillet

AP-NORC poll: Half of Americans would get a COVID-19 vaccine