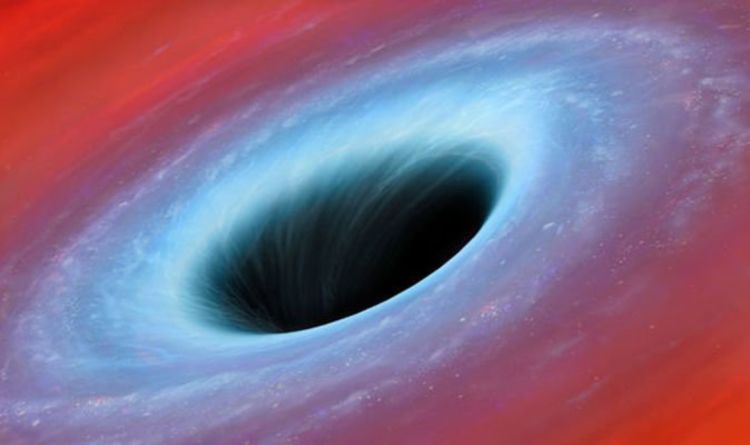 Black holes are parts of spacetime displaying such powerful gravitational pull that nothing – even light – can escape. Black holes were thought to take on the shape of a donut. But scientists  now need to re-write the astronomical rulebooks after proving black holes actually resemble 3D fountains.

It has until now been assumed that gas surrounding black holes was donut-shaped.

But scientists now believe the reality about black holes is far more complex, after studying one 14 million light-years away.

Gas surrounding black holes spews from them in a 3D fountain, new research has revealed.

Researchers were observing a supermassive black hole at the centre of the Ciricinus galaxy.

Data from this was compared this with a simulation of gas into a black hole, using the Cray XC30 ATERUI supercomputer.

Their conclusions challenge the belief that matter falling into a black hole builds up around it to form a donut structure.

The results now suggest it is more of a three-step process.

First, the cold gas forms a disk near the plane of rotation, heating up until the molecules break down.

Some of these molecules are expelled above and below the disk, then create a fountain-like structure.

“Rather than starting from assumptions, our simulation started from the physical equations and showed for the first time that the gas circulation naturally forms a donut.

“Our simulation can also explain various observational features of the system.”

These findings have upended what we thought knew.

Keiichi Wada added: “By investigating the motion and distribution of both the cold molecular gas and warm atomic gas with ALMA, we demonstrated the origin of the so-called ‘donut’ structure around active black holes.

“Based on this discovery, we need to rewrite the astronomy textbooks.”

Virus warning: DEADLY viruses could be unleashed as ice melts

China has put 33 million people on lockdown because of the coronavirus outbreak. An urban planner says there's no way to seal off a...

Dispensed: Dispatches from Davos, updates from the upcoming One Medical IPO, and meet the newest member of the BI healthcare team

Bitter cold to remain absent from midwestern, northeastern US into end of January

Are ghosts real? Scientists claim to have just discovered the TRUTH

Power Line: Investors bet on plasma hotter than the sun, and long-lasting batteries brought to you by Bill Gates