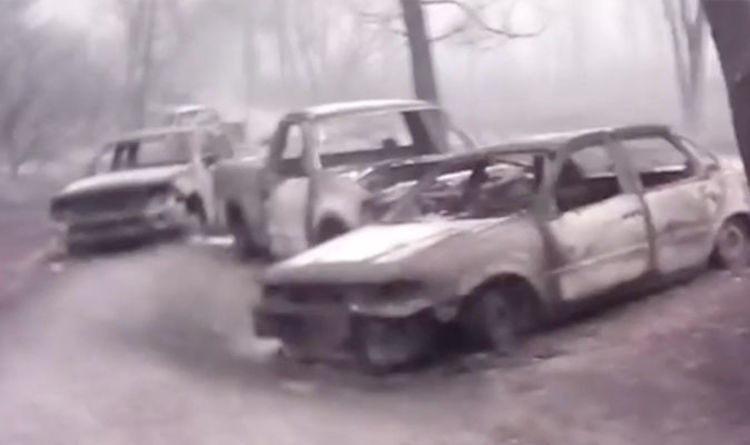 A distressing video filming the surroundings of a woodland area in California shows the shocking extent of the Camp Fire death toll.

A devastated man took the footage, surrounded by the bodies of his friends who died in the wildfires.

While filming, survivor Greg Woodcox labelled it a “horrific way to die”.

He said: “Oh my God I’ve been away from here that’s where I jumped over the fence right there. This guy didn’t make it, there’s a bunch of dead bodies here, we got trapped.

“This is the poor guy that came down to get my crippled friend out, and he didn’t make it.

“I went to their house right here in this white car to get them out. She had to put her make-up on, she died because of it.

“I can’t believe my Jeep made it, my dogs, I prayed, this is the Holy Spirit working for you. I mean, my dogs went through the fire, it’s totally melt down.

“Everybody died down there, we got trapped down here we couldn’t get out. My friend that died, he was a cripple, he’s dead. That’s just a horrific way to die.”

Official reports say a total of 228 people are still missing as a result of the horrific wildfires.

Butte County Sheriff Cory Honea announced the figure on Sunday night, raising the number of people missing by more than 100.

At least 31 people have died in the fires, as reported by CNN.

The revised death toll means the disaster has matched the deadliest wildfire on record in Californian history.

Sheriff Honea said the human remains recovered on Sunday included five bodies found in properties and one in a vehicle in Paradise.

He also announced that 228 people remain unaccounted for since the fire began Thursday and subsequently incinerated the foothill town.

US President Donald Trump controversially tweeted about the fires, posting: “There is no reason for these massive, deadly and costly forest fires in California except that forest management is so poor.

“Billions of dollars are given each year, with so many lives lost, all because of gross mismanagement of the forests. Remedy now, or no more Fed payments!”

He said: “The President’s message attacking California and threatening to withhold aid to the victims of the cataclysmic fires is ill-informed, ill-timed and demeaning to those who are suffering as well as the men and women on the front lines.

“In my view, this shameful attack on California is an attack on all our courageous men and women on the front lines.”

In apparent reversal, Trump encourages Floridians to vote by mail

What did you do during lockdown? I was playing ‘Grand Theft Auto’

Aboard the Diamond Princess, a Case Study in Aerosol Transmission