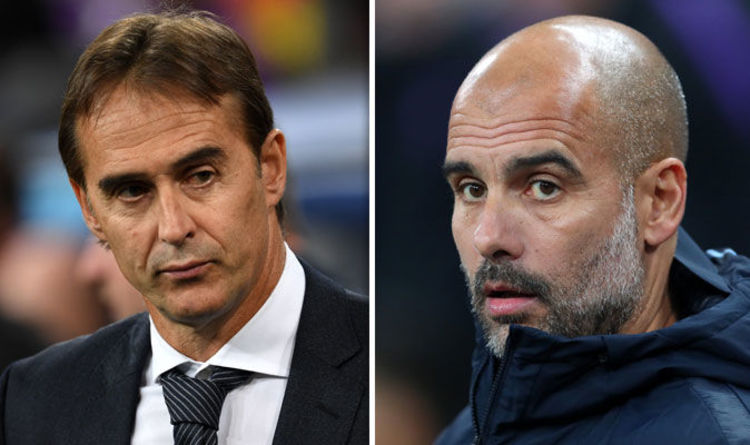 That’s the view of Manchester City boss Pep Guardiola, who has said he will give Lopetegui a call after his dismissal.

The former Spain manager was sacked as boss of Real Madrid yesterday after a dismal start to the season.

Los Blancos sit ninth in La Liga and were thumped 5-1 by arch-rivals Barcelona on Sunday.

That proved to be Lopetegui’s last game with Real Madrid chiefs dismissing the manager with Santi Solari stepping in as caretaker.

Guardiola is a former manager of Barcelona, having led the Catalan giants to three La Liga titles during his time in charge at the Nou Camp.

And the current City boss knows how ruthless football can be as he admitted he feels for Lopetegui.

“Football I know what it is, we are still here because we win games, if we don’t win we will be sacked,” Guardiola said.

“I’m sorry for Julen because he’s a friend of mine. He’s an exceptional person.

“I want to call him in the next few days

“It is what it is. It’s football, nobody escapes that.

“When you have bad results you will not continue in big, big places like Barcelona or Madrid … I wish him all the best.”

A Real Madrid statement confirmed Lopetegui’s axe, saying: “The Board of Directors of Real Madrid CF, meeting today October 29, 2018, has agreed to terminate the contract that linked coach Julen Lopetegui with the club.

“This decision, adopted from the highest level of responsibility, aims to change the dynamics of the first team, when all the objectives of this season are still achievable.

“The Board of Directors understands that there is a great disproportion between the quality of the staff of Real Madrid, which has 8 players nominated for the next Golden Ball, something unprecedented in the history of the club, and the results obtained to date.

“The club thanks Julen Lopetegui and all his technical team for their effort and work and wishes them the best in their professional career.

“It will be provisionally replaced by Santiago Solari, who will lead the first team starting tomorrow, Tuesday.”

Coronavirus warning: Pensioners vulnerable to die from virus – Patients over...

February 18, 2020
The shocking findings from a team of researchers in Beijing were revealed as the World Health Organisation (WHO) warned people to remain cautious as...

Coronavirus warning: Pensioners vulnerable to die from virus – Patients over...

How to avoid falling victim to a coronavirus email scam