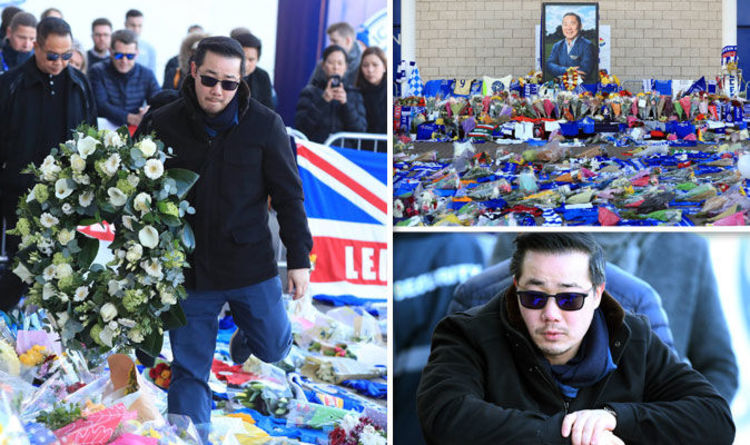 Aiyawatt Srivaddhanaprabha – known as Top – arrived at the King Power Stadium to lay wreaths after his father was tragically killed in the helicopter crash on Saturday night.

Top was with his wife and other family members at the memorial site around the stadium.

There is due to be a press conference at the stadium where some players are expected to address the media.

The players have arrived at the stadium for a prayer service.

The tragic incident on Saturday killed five people including the Leicester City owner.

Thousands have since paid tribute to the Thai businessman, his assistants Kavenporn Punpare and former Thai beauty queen Nusara Suknamai, 33 and the pilot and co-pilot Eric Swaffer and Izabela Roza Lechowicz.

The crash happened just after Leicester’s draw with West Ham on Saturday.

But silence fell around the ground this afternoon as the Srivaddhanaprabha family made their way to the memorial site.

Club officials, including director of football Jon Rudkin and chief executive Susan Whelan, also attended as they viewed the floral tributes and the family laid their own.

The president of the Thai FA, Somyot Poompanmoung and his wife, Potjaman Poompamoung, were also among the group, while various personalities from sport and showbiz – including Kasabian signer Tom Meighan – also arrived.

A devastated Kasper Schmeichel posted an emotional tributes to the man who “changed football forever.”

Denmark international goalkeeper Schmeichel, who was reported to have witnessed the accident, thanked Srivaddhanaprabha for making his football dreams come true in an emotional post on his Instagram account.

“Dear Mr Chairman. I cannot believe this is happening. I am so totally devastated and heartbroken. I just cannot believe what I saw last night. It just doesn’t seem real,” he wrote.

“It is difficult to put into words how much you meant to this football club and to the city of Leicester. Never have I ever come across a man like you. So hard working, so passionate, so kind and so generous in the extreme.

“You changed football. Forever! You gave hope to everyone that the impossible was possible. You literally made my dreams come true.

“We now have a responsibility as a club, as players and fans to honour you. From knowing you we do this by being the family you created.”

Kasabian singer Tom Meigan paid his respects (Mike Egerton/PA)Schmeichel’s powerful words were echoed by his team-mates, who were expected to arrive at the stadium later on Monday.

“Words can’t describe how I feel. A truly great, kind, loving man who will be missed so much by everyone. I will never forget the Chairman’s support, not only during my time @LCFC but also during the World Cup,” England defender Harry Maguire wrote on Twitter.

Fellow City defender and England left-back Ben Chilwell hailed “one of the best people you could wish to meet”.

Writing on Twitter, he said: “I can’t believe it. I am heartbroken to hear that no-one survived the crash yesterday.”

Jamie Vardy – whose meteoric rise through the leagues was matched step-by-step by the club as they came from nowhere to win the Premier League in 2016 – called Srivaddhanaprabha a “legend”.

He said on Instagram: “Struggling to find the right words, but to me you are a legend, an incredible man who had the biggest heart, the soul of Leicester City Football Club. Thank you for everything you did for me, my family and our club. I will truly miss you, may you rest in peace.”

Srivaddhanaprabha was the driving force of Leicester’s rise from the Championship to the top of the Premier League, bringing together a band of nomadic players who were superbly guided by manager Claudio Ranieri.

Wes Morgan was the captain of that side and said: “Absolutely heartbroken and devastated regarding the news of our chairman. A man that was loved and adored by everyone here at LCFC and someone who I personally had the utmost respect for.”

Those sentiments were echoed by former Foxes and England striker and Leicester native Gary Lineker, who saw the club claim the Premier League title at odds of 5000/1.

He said on Instagram: “A quiet, unassuming man who will always be remembered with great fondness and respect. He also helped to bring the most magical, miraculous title win in the history of football.

“Thank you, Chairman, for all you did for our football club. £RIP”

The Football Association turned the Wembley arch blue and white out of respect, while clubs all around the world, ranging from Real Madrid to non-league sides, paid tribute.

FA President, HRH the Duke of Cambridge, said in a statement: “My thoughts today are with the family and friends of Vichai Srivaddhanaprabha and all the victims of the terrible crash at Leicester City Football Club.

“I was lucky to have known Vichai for several years. He was a businessman of strong values who was dedicated to his family and who supported a number of important charitable causes.

“He made such a big contribution to football, not least through Leicester City’s magical 2016 season that captured the imagination of the world.”

Former Leicester player Alan Birchenall, now a club ambassador, revealed Srivaddhanaprabha, who donated millions to local charities, had proved a staunch ally to him after he suffered a heart attack.

Birchenall told Sky Sports News: “What this club gave back to me through Khun Vichai is unbelievable. In fact, when I was out of action, the club sent me a cleaner to come and clean my little hovel, and she’s still doing it today 18 months on!

“hat’s Khun Vichai. He knew and he said, ‘You’ve still got that cleaner, Birchy. She was only supposed to be with you until you got on your feet again!’. But that was him.”

Premier League executive chairman Richard Scudamore, who handed Srivaddhanaprabha that most unlikeliest of trophies two years ago, said: “Vichai was a gentleman who graced the game with his civility and charm and we will miss him enormously.”

New Ipswich boss Paul Lambert, who lives locally, was also at the King Power Stadium to pay his respects.

Lambert said: “It’s not just the football club, it’s the whole of Leicester. It’s incredible what he (Vichai) did for everyone and it’s still incredibly shocking. I was in the city this morning and I wanted to come down and pay my respects like everyone else.

“He did it right. He embraced everything, he embraced the city and they embraced him. The two bounced off each other. His ownership wasn’t just football. It was a human thing as well.

“Others have died as well and it’s horrific, it’s absolutely tragic.” 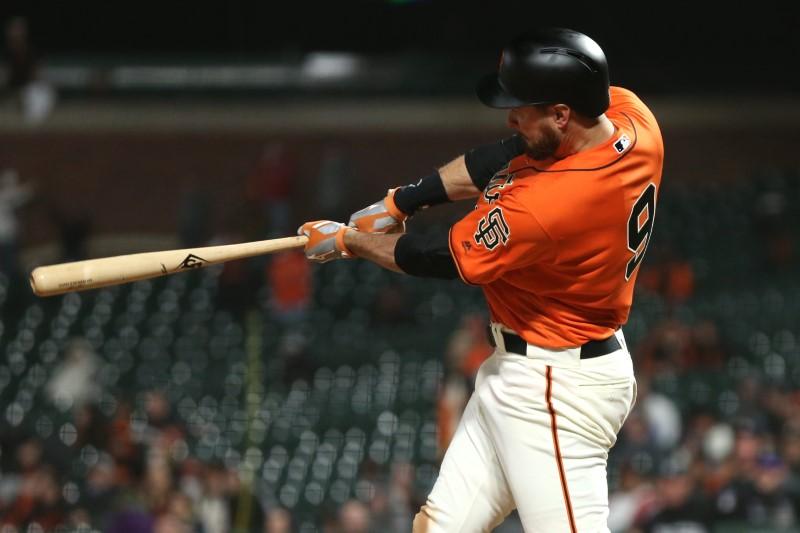 Brandon Belt opened the 18th inning with a double, and he slid home on Erik Kratz’s bases-loaded ground ball one out later, […] 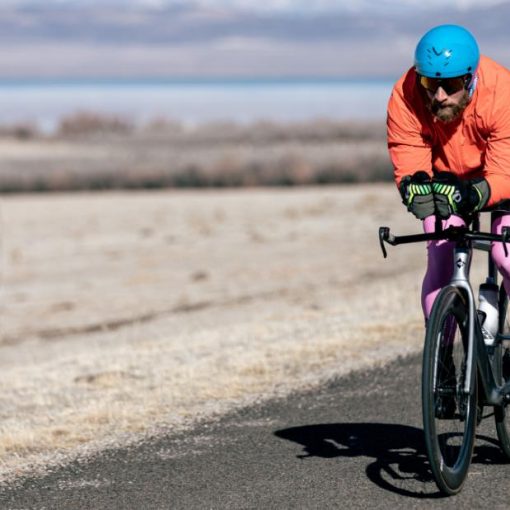 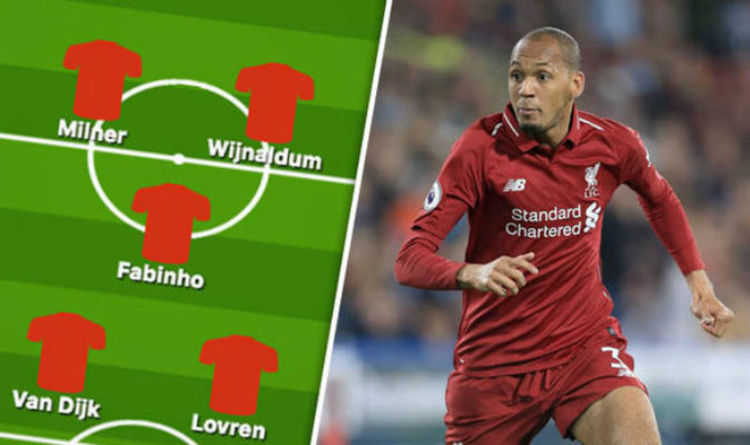 Liverpool will be without without injured midfielders Jordan Henderson and Naby Keita for the visit of Cardiff. Henderson was substituted during last […] 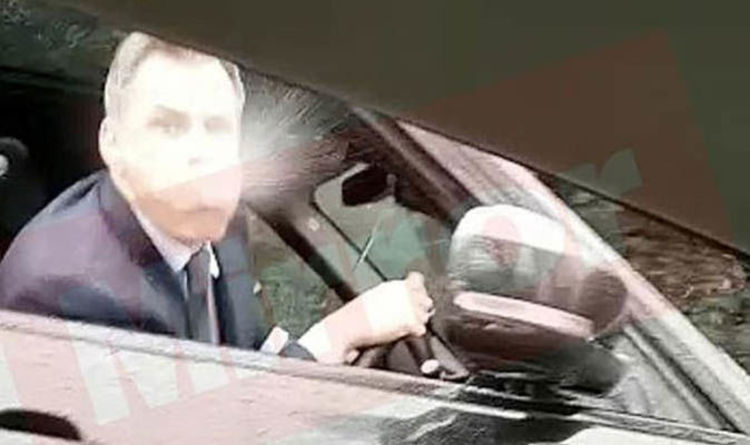 The Liverpool legend was due to assess Manchester United’s Champions League clash against Sevilla on Tuesday for TV3 Sport. But bosses at […]