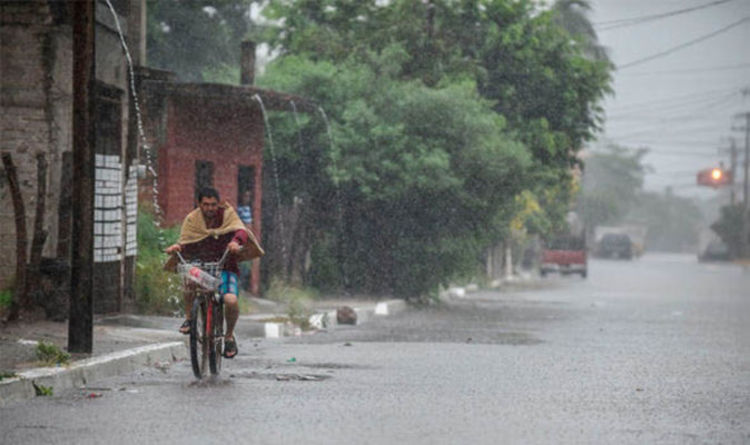 Willa lashed heavy rainfall and powerful winds as it made landfall on parts of Western Mexico on Wednesday.

Areas affected included south of Mazatlan, close to the community of Escuinapa.

The hurricane was previously a Category 5, but weakened to a Category 3 as it prepared to make landfall.

After wreaking havoc across Mexico, the storm then weakened further to a tropical depression this morning, local time.

At least 8,000 people were evacuated from high-rise areas.

Winds reached speeds of more than 100 mph, which resulted in power cuts and damage to homes and businesses, according to Reuters.

Willa will disappear over northern Mexico by the end of today.

But the storm will still bring downpours and potential flooding and mudslides to Durango, Zacatecas and Coahuila over the next day.

Parts of the US, including Texas, could also be flooded over the next few days, as moisture from Willa will be pulled northeastward into southern areas.

Where will the next hurricane hit?

Mark Bourassa, Professor of Meteorology at Florida State University, revealed predicting when the next hurricane will hit will not be straight-forward.

He told Express.co.uk: “Until hurricanes form it is really hard to guess where they would hit.

“We can make some guesses, but they cover large enough areas that they are not effective.

“Responding to such guesses would be a huge economic burden and would result in most people ignoring the forecasts.”

Dmitry Dukhovskoy, who is a research scientist at Florida State University, added another hurricane could be on its way before the 2018 season ends next month.

He said to Express.co.uk: “Officially, hurricane season ends on November 30.

“Given anomalously warm autumn this year and warmer than usual Gulf of Mexico, it would not be surprising if another hurricane develops over the gulf.”

If there are any more hurricanes this season, they could be named Walaka, Akoni, Ema or Hone.

On the trail: Sanders, Buttigieg spar ahead of next Democratic vote

'Most devastating plague of locusts' in recent history could come within weeks, U.N. warns

Biden faces competition for black vote in his SC 'firewall'

Soldier kills 29 people in Thailand before being shot

WW3 fears: How US could be dragged into terrifying China conflict without firing a bullet

How 2020 Democrats Plan to Deal With Trump's Remade Judiciary

February 8, 2020
The video shows a man getting out of a vehicle and opening fire near a shopping centre in Korat, Thailand. Jakraphanth Thomma opened fire at...

Iran to execute man accused of being 'CIA spy', with sentence to be carried out 'soon'