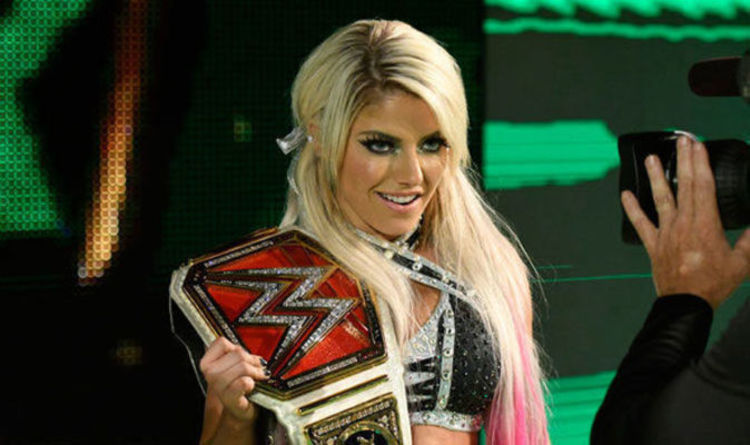 Bliss suffered an arm injury at Hell in a Cell where she failed to recapture the RAW Women’s Championship from Ronda Rousey.

The Goddess made various appearances on RAW in a non-wrestling capacity ever since picking up the injury but now seems closer to reaching full fitness.

According to Sportskeeda, the five-time women’s champion has been cleared for light mobility in the ring, which means she can take part in some physical contact.

Bliss was removed from WWE Mixed Match Challenge ever since she hurt her arm and was replaced by Ember Moon.

“As a reminder, Alexa had a match against the RAW Women’s Champion Ronda Rousey this past Sunday night at WWE Hell in a Cell where Alexa tapped to the champion’s Armbar.

“We can officially announce at this time that Alexa Bliss has not been medically cleared to compete at the WWE live events this weekend or in tonight’s WWE Mixed Match Challenge.

“I got a word in with Acting [RAW] General Manager Baron Corbin and he announced that Alexa’s replacement will be none other than Ember Moon.”

The 27-year-old is now scheduled to compete in WWE’s first ever all-women’s Pay-Per-View event Evolution.

The groundbreaking show takes place on October 28 at the Nassau Veterans Memorial Coliseum in New York.

Bliss is set to take on seven-time Women’s Champion and WWE Hall of Famer Trish Stratus in a dream match.

The bout is still being advertised despite The Goddess’ injury and it looks like she will probably reach full fitness in time for the highly-anticipitated bout.

Bliss has taken the WWE Universe by storm ever since she joined the main roster in 2016 after a three-year stint on NXT.

The Ohio grappler became a two-time Smackdown Women’s Champion on the blue brand.

She then moved to RAW where she won the RAW Women’s Championship three times and beat the likes of Nia Jax, Sasha Banks and Bayley.

Bliss also won the first ever Women’s Elimination Chamber Match and also became the second ever Ms Money in the Bank winner.

No race cancellation even if driver has COVID, says F1 boss

Dr. Anthony Fauci: I wear a mask because it's effective