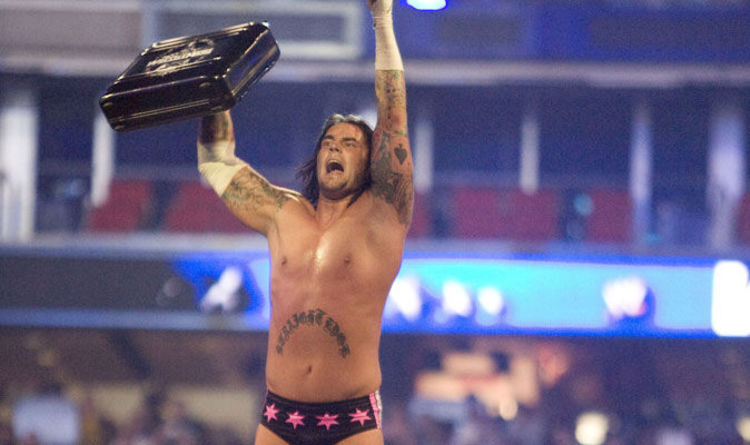 Punk won the World Heavyweight Championship 10 years ago after cashing in his Money in the Bank contract on Edge during an episode on RAW.

However, his reign only lasted 69 days as he was stripped of the belt just a few minutes before defending it in a Scramble Match against Batista, Kane, JBL and Rey Mysterio.

The Straightedge Superstar was attacked backstage by Randy Orton, Cody Rhodes, Ted Di Biase as well as Manu and was taken out of commission after The Viper kicked him in the head.

CM Punk couldn’t compete at the main event and was instead replaced by Jericho who became the new World Heavyweight Champion.

According to Ringside News, Bruce Prichard explained in his show “Something Else to Wrestle with Bruce Prichard” that WWE wanted Y2J and Michaels to fight for RAW’s premier title in a Ladder Match at the next Pay-Per-View show and needed to set it up at Unforgiven somehow even though the two legends weren’t part of the Scramble Match.

Prichard added that Punk was not happy at all with the decision and it showed during the staged attack.

He said: “Confusion, really confusion, and when you look back, to me, Jericho and Shawn did not need that f****g title.

“I thought that the championship helped Punk. But, at that point, it was needed for a prop… to have a Ladder match.

“So, as crazy and as many conspiracy theories that people wanna throw out there, it’s as simple as that.

“Yeah, it did [suck] and also what sucked is, you can see, hindsight being 20/20, you see the interview with Punk where they jump him and Punk’s not even into it.

“He’s frustrated and probably upset all rightfully so by the way. So you feel before they even jump him its, ‘Okay, I’m gonna do this, it’s whatever, f**k it’, and it did suck because it made no sense.”

CM Punk is one of the biggest WWE legends of all time as he won six world titles and beat some of the greatest superstars ever like John Cena, Daniel Bryan, Jericho and many more.

The Best in the World left Vince McMahon’s promotion in 2014 citing creative differences as well as health issues and joined UFC shortly after.

Punk lost both his first fights in the Octagon to Mickey Gall and Mike Jackson.