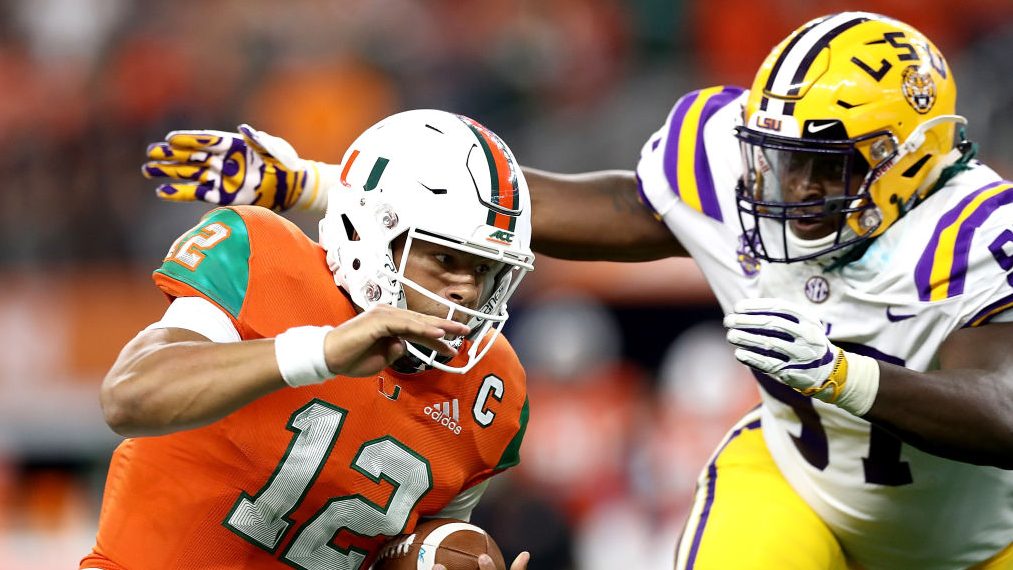 After a 2017 season that saw the Hurricanes start 10-0, including those back-to-back wins over top-15 Virginia Tech and Notre Dame teams, and finish 0-3 with back-to-back-to-back double-digit losses, the goal, the hope, for No. 8 Miami entering Sunday night was to show that 2018 would be more about the first 10 and not the last three.

The first 30 minutes of Sunday night’s game showed that plan to be unfounded. No. 25 LSU opened up a 27-3 halftime lead and cruised to a 33-17 statement win at AT&T Stadium in suburban Dallas.

Before the game turned into a blowout, though, there was a moment when Miami appeared to have the upper hand. That’s all it was, a moment, but it happened. Tied 3-3 late in the first quarter, Miami moved from its own 30 to the LSU 32, but the drive sputtered and freshman kicker Bubba Baxa‘s 45-yard field goal sailed wide right.

Then the rout was on.

After forcing a three-and-out, LSU scored on another Brossette run, a 1-yarder, which was set up by a 22-yard connection from Joe Burrow to Ja’Marr Chase which appeared to fall incomplete on second glance, but the Tigers were able to snap the ball before the replay official could intervene.

With the score at 20-3 midway through the second quarter, Malik Rosier made a mistake that buried the Hurricanes for good when he didn’t see LSU linebacker Jacob Phillips lying in wait for his slant pass, and Phillips raced the interception 45 yards for a touchdown.

Staked to a 24-point halftime lead, Ed Orgeron took the air out of the ball in the second half — not that the Tigers were slinging it around to begin with — and the Bayou Bengals managed just the third and fourth of Cole Tracy‘s field goals, a transfer who last played at tiny Division II Assumption College in Massachusetts.

A pair of Rosier touchdowns, a 3-yard run with 13:57 to go and a 32-yard strike to Brian Hightower with 8:43 remaining, allowed Miami to cling to a slight glimmer of hope when taking over at its own 5 with 6:30 remaining to chip away at a two possession deficit. Rosier maneuvered the Canes from the shadow of their own goal post to the LSU 40, but Rosier tossed three straight incompletions and then was sacked on 4th-and-10 with 4:40 to play, allowing LSU to shut the door on any possibility of a UCLA-over-Texas A&M Labor Day Sunday redux.

LSU’s offense didn’t jump off the page, as the Tigers achieved only 17 first downs and converted just 3-of-16 third downs. Burrow was a workmanlike 11-of-24 for 140 yards, and Brossette led all runners with 22 carries for 125 yards and two touchdowns. But the Tigers didn’t need to be spectacular to win on Sunday; capitalizing on Miami’s plethora of offensive and special teams mistakes proved to be more than enough. Rosier tossed two interceptions and Zach Feagles averaged just 36.4 yards on five punts.

Miami’s poor special teams has been a big factor in this game. LSU had great field position for all but one of its scoring drives:

Rosier battled through the entire game, hitting 15-of-35 passes for 257 yards while being credited with 15 carries for 12 yards. DeeJay Dallas led Miami in rushing with 38 yards on eight carries.

LSU opens its home schedule next week with Southeastern Louisiana before beginning its SEC gauntlet with a trip to No. 9 Auburn on Sept. 15 (3:30 p.m. ET, CBS). The Tigers team that took the field Saturday night flashed plenty of potential to win 10 or more games, but a schedule that includes No. 3 Georgia and Florida in addition to a more-ferocious-than-ever SEC West will make them earn it.

Miami, meanwhile, plays a schedule that could still see the Canes reach double-digit wins again. Mark Richt‘s team gets Florida State at home and does not face No. 2 Clemson. But Sunday night’s result shows a potential 10-win season would once again be a mirage. 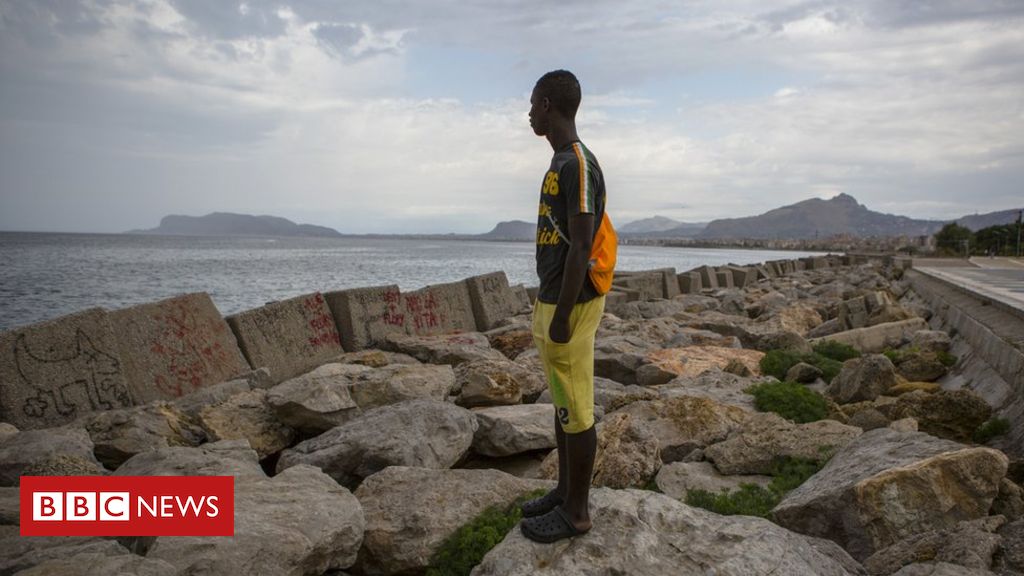 Image copyright Kate Stanworth In our series of letters from African journalists, Ismail Einashe tries to find out what made a young […] 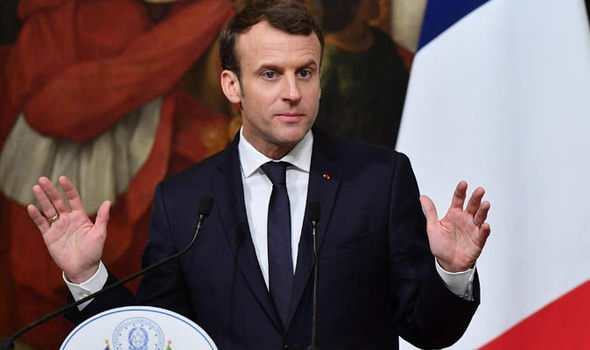 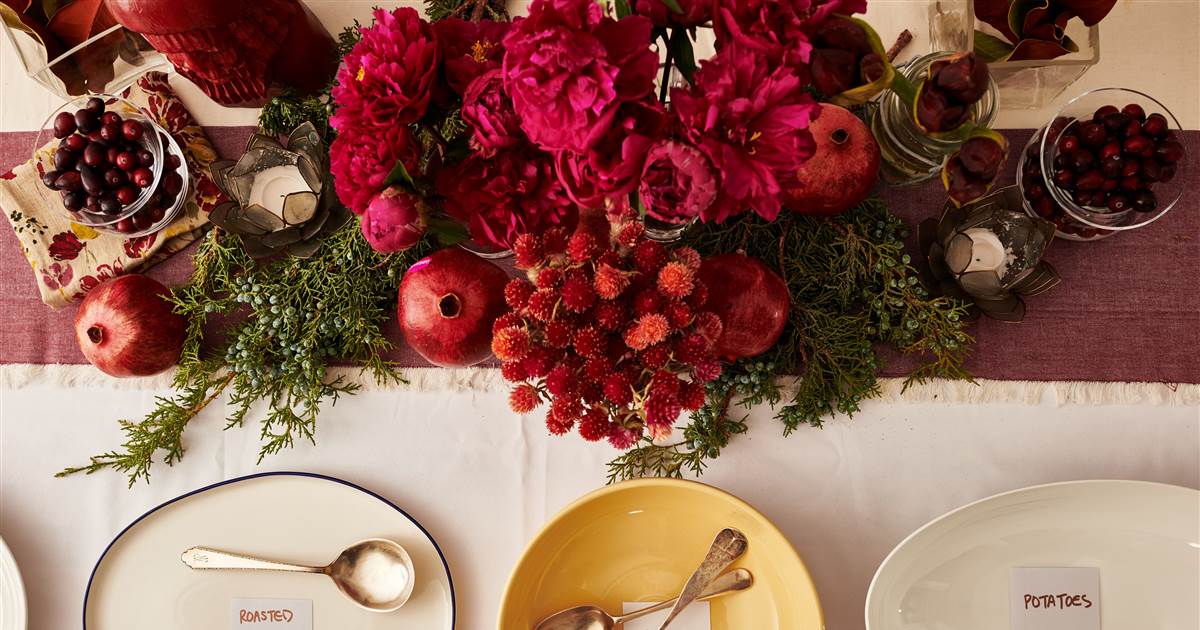 If you are hosting a New Year’s gathering, or other sizable holiday party, then I’m a firm believer that buffet is the […]