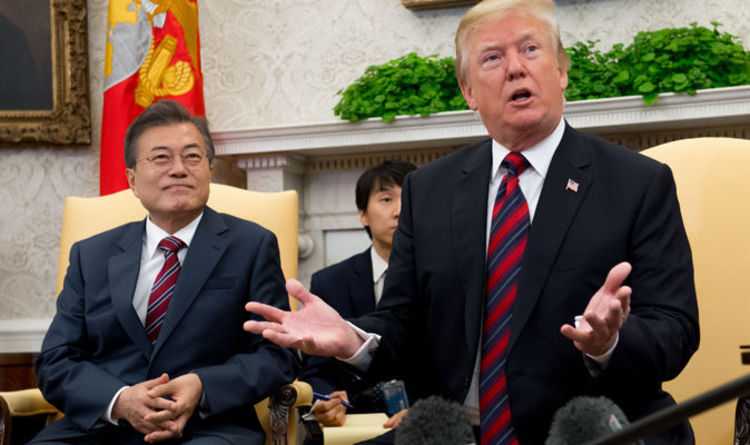 The North and the South Koreas had planned to start a joint field study where they would send a train from Seoul, through North Korea all the way to Sinuiju on the Chinese border.

This is the latest sign that South Korea are keen to begin economic co-operation with the North following on from North Korea’s leader Kim Jong-un’s historic visit to the South in April.

Kim Jong-un became the first North Korean leader to cross the military line in the heavily fortified demilitarised zone that has divided the Koreas since the end of the Korean War in 1953.

However, the Koreas’ application for the train project was denied by the US-led United Nations Command.

The UN Command has controlled all movement through the demilitarised zone since the end of the Korean war.

They blocked the study and said they were “requesting more fidelity on the details of the proposed visit.”

The move comes a week after US President Donald Trump cancelled the planned trip of a US diplomat to North Korea on Friday August 24th.

President Trump said: “I have asked Secretary of State Mike Pompeo not to go to North Korea, at this time, because I feel we are not making sufficient progress with respect to the denuclearization of the Korean Peninsula.”

He has also accused China of “providing North Korea with considerable aid, including money, fuel, fertiliser and various other commodities”.

The President tweeted: “This is not helpful!”

Until North Korea scraps its nuclear weapons programme the US is likely to insist on maintaining sanctions and keeping the North Korean leader isolated.

President Moon Jae-in, who began serving in May 2017, has called for rail links between the North and the South by the end of 2018.

Philippines Troll Patrol: The woman taking on trolls on their own turf

To save the American economy, Trump and Biden must look to U.S. Latinos

British tourist, 32, 'is raped by three men in Italy'