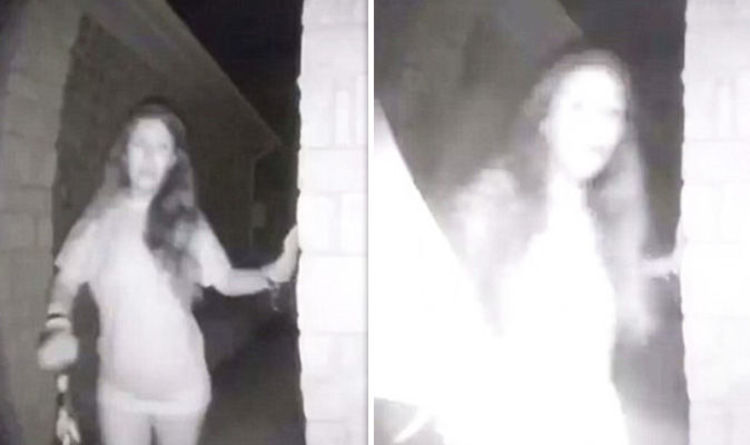 The woman, who was wearing just a white t-shirt, was recorded on a home security camera at 3.20am local time last Friday in Texas.

She can be seen walking up to the door from behind a bush and ringing the doorbell before then walking away.

The footage went viral after police launched a desperate appeal to find the missing woman, who has since been found safe and is now with family.

Montgomery County Police revealed that the woman’s 49-year-old boyfriend had died from a single gunshot wound in a suspected suicide.

The boyfriend was also found on Wednesday with a suicide note that linked him to the woman seen in the video.

Speaking at a news conference on Thursday, Lt Scott Spencer said: “She’s very distraught about this, she’s embarrassed, she’s upset, she’s in shock that it’s come to this, so we’re giving her her time and we’re staying in communication with her to get further details.”

The police also said the 32-year-old woman would not be identified as she is a victim of domestic violence.

One Sunrise Ranch resident, who did not want to be named, told Click2Houston: “We were dead asleep in our beds. My husband was woken up by doorbell ring. It rang probably 20 to 30 times.”

The resident said that by the time the husband answered the door there was no one there.

The resident added: “He walked outside no one was in sight. It’s like she disappeared in thin air.

“You can see her with a worry on her face looking around.”

The mystery woman rang on at least five doorbells in the area.

The police also confirmed that the woman had not been reported missing at any point.

Cycling: UCI to conduct full survey of crashes in 2021 to improve rider safety

Science shows watching cute animals is good for your health

Stars down Lightning in OT behind Perry’s game-winner

Italian family fosters Gambian migrant: 'The son we never had'