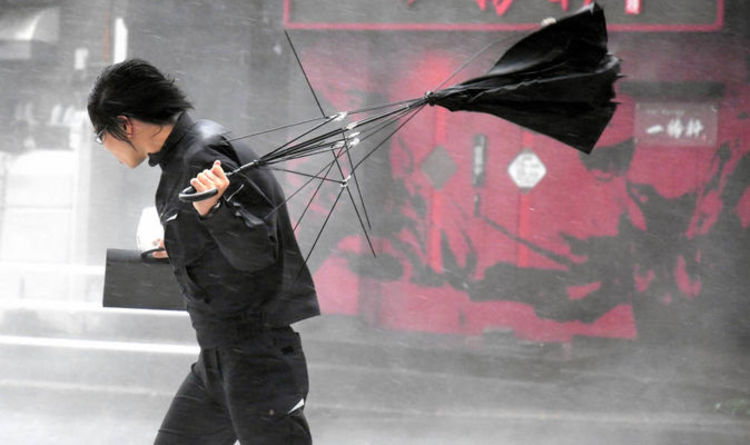 Japan has already been hit by two typhoons, a depression and a monsoon in August.

But more rain is on the way as Jebi strengthened into a typhoon on Wednesday at noon, local time.

The storm will be the 13th tropical cyclone to hit Japan since mid-June, according to the Weather Channel.

Is the typhoon strengthening?

The Weather Channel confirmed Jebi has intensified to Category 5 strength and is currently spinning northwest of Guam.

The storm has also now been dubbed “Earth’s most intense storm of 2018”.

Jebi has also picked up speeds of more than 110 mph in just over 48 hours.

Over the weekend, Jebi will start to turn northwest over the western Pacific Ocean.

Will it make landfall in Japan?

On Monday, Jebi will turn to the northeast due to a southward dip of the jet stream approaching from Manchuria.

Jebi will threaten Japan and make landfall on Tuesday, but will have weakened by then.

The storm will potentially bring powerful winds, flooding and mudslides.

By Wednesday, Jebi could then reach north-northeast as far as Hokkaido as a tropical storm.

Forecasters do not yet know where the worst impacts may occur in Japan next week.

Jebi is set to be the seventh typhoon to either make landfall or get very close to Japan since July.

Unable to open its concert hall, New York Philharmonic brings its music to the streets

Coronavirus cases at University of Alabama climb to more than 1,000

Syria talks 'respectful' but no agenda, date for next meet