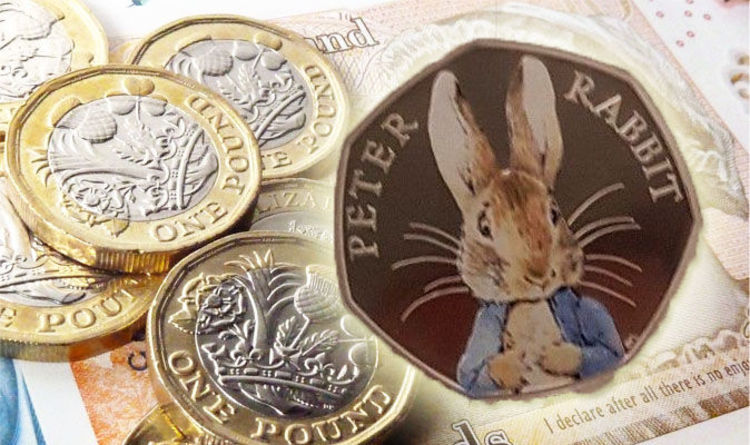 The Beatrix Potter coin is part of a set which was sold alongside with it in the ad.

The Royal Mint began the Beatrix Potter collection in 2016, creating 10 coins this year, and 14 in 2017. A further 14 coins have been created this year.

They wrote: “A chance to own this lovely Beatrix Potter silver proof set including the very rare and much wanted peter rabbit 2016 coin.

“You are bidding on five silver proof coins with coloured characters.

“All are boxed with booklets and come with certificates of authenticity.

“All are perfect condition. Buyer will not be disappointed.”

Silver proof coins are rarer than coins in circulation, with only 15,000 of the pieces created.

Collectors are often on the lookout for pieces such as these.

Royal Mint said of the Peter Rabbit collection: “Ever since we began celebrating the life and work of Beatrix Potter in 2016, Peter has launched the coin range for each year, followed by other characters on their own coins.

“Every detail, from his little blue coat to his long whiskers, has been captured on the coin’s small surface. “It shows the iconic image of Peter Rabbit munching on radishes after another near-miss in Mr. McGregor’s garden.”

Recent additions to the collection this year include Flopsy Bunny and Mrs. Tittlemouse.

Another rare coin has sold for £500 recently. The Charles Dickens £2 coin went for the big bucks on the online auction site.

Hoping to make a profit, the seller then elaborated in depth about the coin in the listing’s description.

The description read: “Here I have a £2 coin for the anniversary of Charles Dickens, it is a double error coin and may be of interest to somebody who collects these.”

The Elements of Wok Hei, and How to Capture Them at Home

The Manhattan Home of an Iranian Princess Finally Sells

Costa Autumn menu: The seasonal drinks and treats Costa has for Autumn 2020