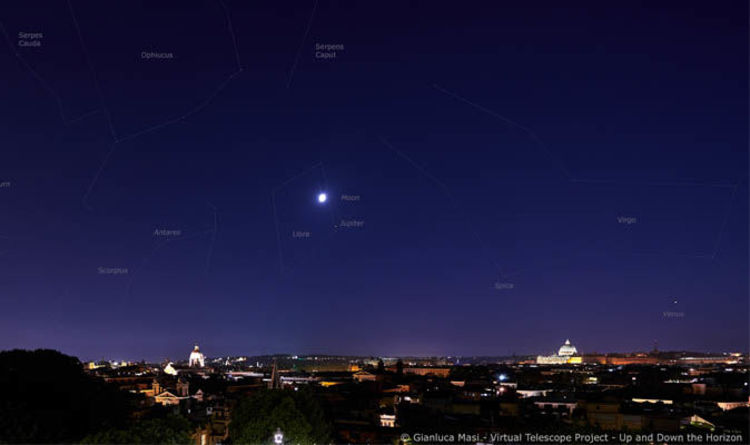 The eight planets of the solar system and the Moon have brightly lit up the night skies this week from sunset to dawn.

If you are lucky and skilled enough, you might just hit the astronomical jackpot and spot Venus, Mercury, Mars, Jupiter, Saturn, Neptune and Uranus all on the same night.

Trying to spot or photograph the entire solar system in one go is an incredible challenge, but astronomer Gianluca Masi told Express.co.uk it is entirely doable.

Just two days ago Mr Masi completed the so-called “Grand Tour” – he photographed every single planet of the system on the same night.

All you need is a bit of patience and basic tools to complete the challenge.

The space expert told Express.co.uk: “These nights it is possible to see all the eight planets of our solar system in one single night.

“This can be done with simple small binoculars or with a camera and tripod.

“Venus, Jupiter, Saturn and Mars are visible soon after sunset. Later Neptune and Uranus are ready to be seen while at dawn Mercury rises just a bit before our Sun.

“The Earth is on the foreground and the Moon, by the way, is also around.”

Mr Masi said completing the Grand Tour requires a bit of movement and knowing the best time to capture each planet in the sky.

Earlier this month on August 17, the astronomer managed to capture four planets at the same time, “crossing the starry catwalk” over Rome.

But capturing all eight planets at once is impossible. Instead, you will have to move around a bit to capture them individually or in pairs.

Mr Masi said: “I did this Grand Tour, succeeding in something I had in mind for many years: imaging all the planets on the same night, showing them above the legendary monuments of Rome.”

Over the course of an entire night, the astronomer hunted down each of the eight planets as they lit up in the skies at different times and locations.

He has now shared some tips on how you can pull off the exact same feat.

All of the photos were taken with a Canon DSLR and a 70-200mm telephoto lens and a standard 24-70mm lens.

Snapping a picture of Venus will require “immediate action” just after sunset as the planet leaves the sky soon after the Sun.

But Jupiter sits not too far away from Venus and you should be able to easily capture both planets next to each other.

The ringed planet Saturn and our red neighbour Mars are similarly within close proximity of one another at night.

Mr Masi photographed both planets over the ruins of the Temple of Saturn and the Temple of Vespasian and Titus at the Roman Forum.

Neptune is the farthest of the eight planets and is the faintest of them all as a result but with a bit of luck you should still spot it as a faint dot of light high up in the sky.

The planet Uranus also appears faint in the sky but you can find it next to the Pleiades cluster of stars in the Constellation Taurus.

Mercury could be the most challenging planet because it rises at dawn, so you will have to get up very early to spot it in the twilight hours.

Mr Masi said: “You have a few days left to do the same journey, go out and try. Good luck.”

In a lucky coincidence, a spacecraft is scheduled to fly by Venus just weeks after researchers announced finding potential signs of life

An ‘uncoordinated’ immune response may explain why COVID-19 strikes some hard, particularly the elderly

Apple’s new watch has a blood oxygen monitor – what is it good for?

TikTok: YouTube launches rival to be tested in India