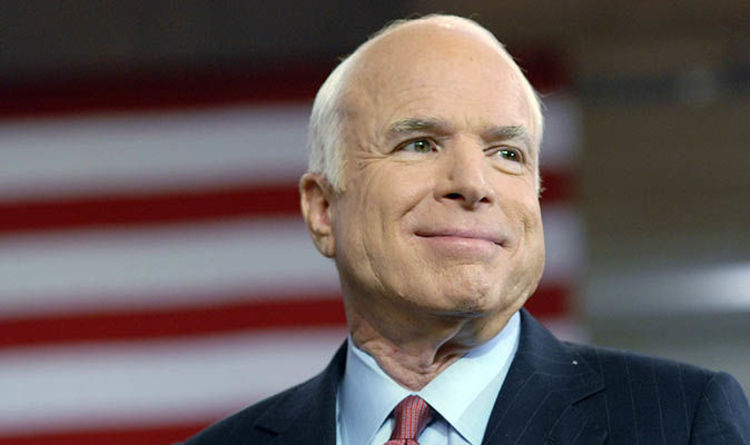 Mr McCain died on Saturday from brain cancer at the age of 81 after a year-long battle with the disease.

Former Presidents Barack Obama and George W Bush will deliver eulogies and so will former Secretary of State Henry Kissinger.

A livestream will be available for the services at the Washington National Cathedral.

On Saturday, the McCain family will escort the late senator along Pennsylvania Avenue to the Vietnam War Memorial, where they will place a wreath in his honour.

There will be a public processional from the Capitol to the Vietnam Veterans Memorial.

According to Mr McCain’s website: “The motorcade will pause at the Vietnam Veterans where Mrs Cindy McCain will lay a ceremonial wreath honoring all whose lives were lost during the Vietnam War.

“The public is welcome to line the procession route along Constitution Avenue to pay their respects to Senator McCain.”

Mr McCain will be laid to rest in a private ceremony on Sunday at the US Naval Academy Cemetery in Annapolis, Maryland, according to McCain’s office.

The former Vietnam prisoner-of-war will lie in state at the US Capitol Rotunda in Washington on Friday.

Members of the public will be allowed to pay their respects during the day.

Mr McCain will become the 13th senator to lie in state in the Capitol Rotunda, an honour reserved for the nation’s “most eminent citizens.”

A memorial service was held on Thursday at the North Phoenix Baptist Church, where former Vice President Joes Biden and others gave tributes to Mr McCain.

Mr Biden said: “They knew that John believed so deeply and so passionately in the soul of America that it made it easier for them to have confidence and faith in America.”

He added: “I always thought of John as a brother. We had a hell of a lot of family fights”

Mr Biden first Mr McCain in the 1970s when Mr McCain was a Navy Senate liaison.

Mr Biden said their close personal bond remained strong even when the senator from Delaware was chosen as the running mate for Mr McCain’s Democratic rival in the 2008 presidential race, Mr Obama.

US President Donald Trump does not plan to attend the funeral on Saturday after Mr McCain also made it clear he did not want Mr Trump invited to the service.

He delayed issuing any statement after Mr McCain’s death and was criticised for removing the US flag on top of the White House from half-mast.

How to watch John McCain’s funeral in Washington

The funeral of at Washington’s National Cathedral on Saturday, September 1 will be live-streamed through the McCain website, starting at 10am ET (3pm BST).

The service is private and only invited guests will be present.

Oregon officials said they are preparing for a 'mass fatality incident' as 500,000 people stand in evacuation zones from the wildfires ravaging the West...