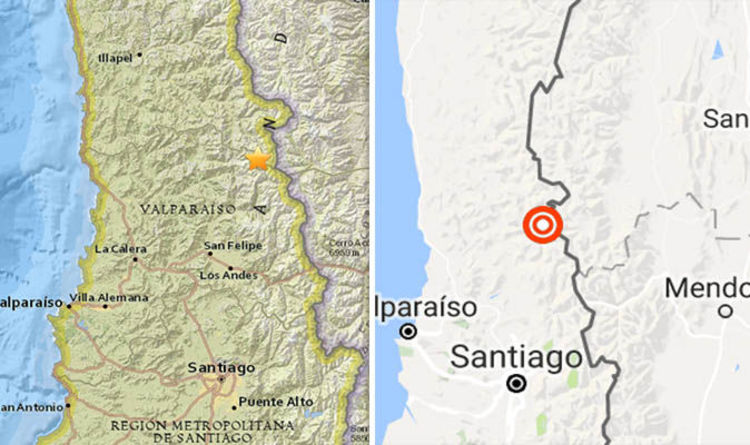 It struck 65km from the town of San Felipe and 105 km from Quillota.

The earthquake measured 5.1 magnitude at a depth of 106.4km.

One witness said on Twitter: “I felt it in Valparaiso now in 4th floor, the building started to sound and also it was long, the earthquake lasted 15-20 seconds.”

The earthquake was felt across Chile, with locals from towns far away saying they felt tremors.

A total of 28 residents in Chile experienced the earthquake’s aftermath, according to USGS, as the 5.1 earthquake struck the region.

One local from the Cordillera province of San Felippe said: “I had to evacuate the building where I work.”

Another local from Santiago, 168km from where the earthquake struck, said: “Very slight movement on 9th floor. Lasted around 10 seconds.”

One resident from Santiago also said: “The doors were moved in the Portal la Reina.”

The tremors were felt across Chile and Argentina, as residents panicked for their safety.

A total of 6 consecutive earthquakes have struck Chile in the past week, with 3 in Argentina and 1 in Peru.

McConnell: Trump's SCOTUS nominee 'will receive a vote' from Senate

NYPD officer arrested for 'acting as an illegal agent for China'

Guy Verhofstadt turns on the EU as he rages at bloc's inaction – 'Get a grip Europe!'

Family of soldier who hanged himself at Fort Hood want answers

The way we collect covid-19 data perpetuates racism in healthcare