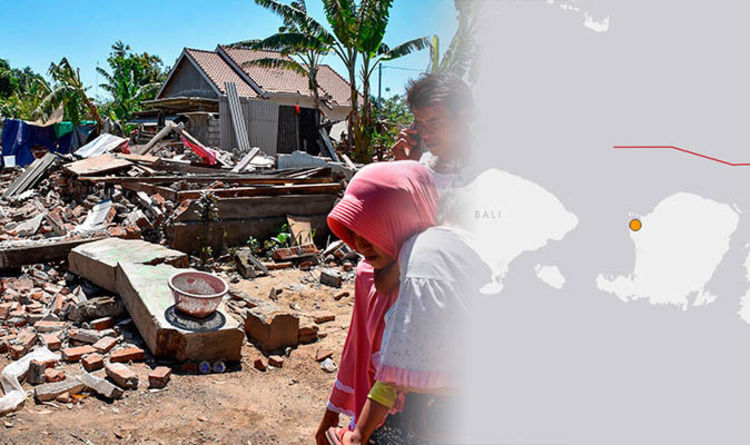 A magnitude 4.8 earthquake is the latest tremor to hit the Indonesia island of Lombok.

The quake struck the popular tourist destination on Friday at 3.37am BST (9.37am WIB) 3km west south-west of Karangsubagan at a depth of 10km (6 miles).

The island continues to be battered by a series of powerful earthquakes, some greater than magnitude 6.

The most deadly quake came on August 5 measuring magnitude 6.9 and another on July 29 at magnitude 6.4.

Shaking was felt as far away as Sumbawa in the east and Trenggalek Regency in the west.

The Indonesian Agency for Meteorology, Climatology and Geophysics (BMKG) stated that the epicentre of the earthquake was located inland, on the northeastern slopes of Mount Rinjani.

Then on August 19, two more large earthquakes rocked the island, the first magnitude 6.3 and the second even larger at magnitude 6.9.

Lombok is located within the infamous Ring of Fire and just south of the island lies some of the fastest colliding tectonic plates in the world.

They move at a rate greater than 7cm per year in a process known as subduction, where one plates slides under the other deep into the mantle.

It is the stresses from subduction which causes many earthquakes to occur and the heating up of the subjecting plate and subsequent melting that leads to many volcanoes on the overlying plate.

As a result, Indonesia is used to both earthquakes and volcanic activity.

However there is no reliable method of predicting when a volcanic eruption or an earthquake will occur, due to the complexity of the Earth.

In a standard earthquake sequence the first earthquake – the mainshock, will be followed by a series of aftershocks of smaller magnitudes which tail off with time.

However in the example of Lombok, the pattern of the earthquakes have been sporadic.

Each of these earthquakes were at different depths within the crust but at roughly the same location, on the northeastern side of Lombok, almost directly beneath Rinjani.

They're at high risk of the coronavirus. But their state might not let them vote by mail.

Tesla driver, 20, is found ASLEEP at the wheel of his self-driving car speeding at 93mph

Japanese finmin to continue to work closely with BoJ’s Kuroda

Dynetics to use in-space refueling for NASA lunar lander