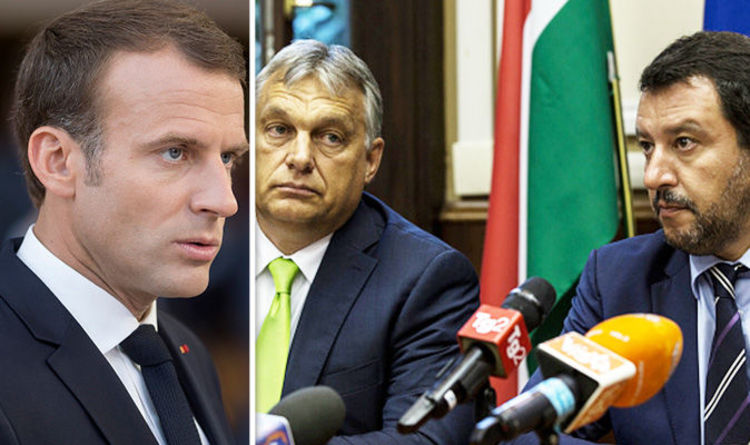 French President Emmanuel Macron responded to Matteo Salvini and Viktor Orban’s attack on his migration policy and lack of cooperation when it comes to asylum seekers landing on Italy‘s shores.

The two eurosceptic leaders met for talks on Tuesday in the Italian city of Milan where Mr Orban described the French President as “the leader of pro-migration parties in Europe today”.

The Hungarian Prime Minister accused Macron of welcoming illegal immigrants into his country and was later echoed by the Italian Interior Minister who claimed the French leader was not helping Rome with migration issues when the country needed it the most.

But the French President hit back on Wednesday, claiming to be the main opponent of nationalists and hate speech defenders.

He said: “They are right, I am their main opponent.

“I will not give into nationalists and to those who defend hate speech.

“If they want to see their main opponent in me, they are right.

“If they think that in France there is an enemy of nationalism, of the politics of hatred, of a Europe that only pays what is convenient for us does not impose any form of responsibility or solidarity, then they are right.

“In the coming days and months, we will have to make in-depth decisions to address the issue of migration.

“This implies seriousness and a spirit of responsibility, remaining faithful to our values such as the right to asylum, with a true policy both towards the countries of origin and the EU.

“This is not what Orban and Salvini are proposing.

“A strong opposition is growing between nationalists and progressives in Europe.”

Italian Interior Minister Matteo Salvini promptly hit back at the French President’s, citing his declining popularity among the French people.

Mr Salvini demanded the French leader opened his doors to more migrants, starting from the city of Ventimiglia on the south-west Italo-Franco border.

He said: “Macron’s main opponent, polls in hand, is the French people.

“Instead of giving lessons to other governments he should open his borders, starting from Ventimiglia.

VP's chief of staff on Supreme Court announcement: 'I don't think it will take us long'

Iran vows 'crushing response to US bullying' after sanctions announcement