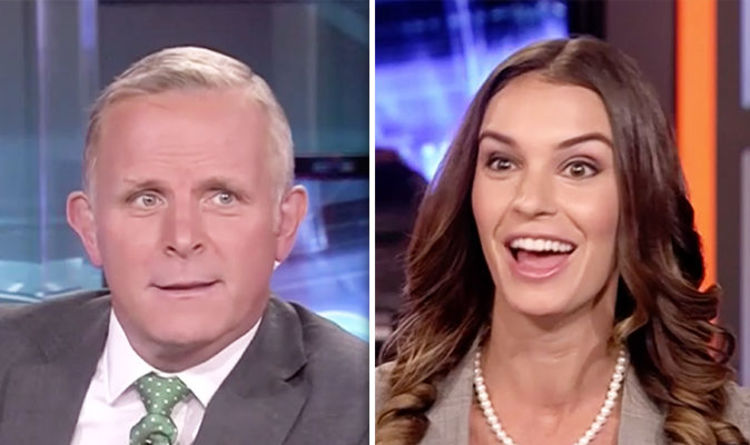 CNBC’s Joumanna Bercetche was discussing her time at a French business conference where she spoke with France’s finance minister Bruno Le Maire on Brexit.

She said that at the conference Brexit was the unavoidable topic “du jour”.

Perhaps sensing a moment for some humour, the presenter Steve Sedgwick cut in and joked limply: “Ah, you speak German!”

The camera panned to the journalist who looked pleased with himself, but the joke fell on deaf ears as Ms Bercetche looked confused and laughed awkwardly before answering: “And German as well”.

Ms Bercetche’s professionalism shone through as she continued presenting her package on her discussion with the French finance minister after an awkward pause.

Speaking to Ms Bercetche at the MEDEF conference in Paris on Wednesday the French finance minister Bruno Le Maire said that the UK could not expect to enjoy the same benefits as EU member countries after the UK has left the European bloc.

“But we have someone who is in charge of that negotiation, he’s doing well. I’m confident that Michel Barnier with the British government will find the right solution to avoid that hard Brexit.

“But everybody has to be also aware that you cannot be in and out.

Mr Le Maire was speaking after the EU’s chief Brexit negotiator said that the EU was “prepared to offer a partnership with Britain such as has never been with any other third country.”

Barnier’s remarks raised hopes of a bespoke Brexit deal and saw the pound surge against the dollar.

In a lucky coincidence, a spacecraft is scheduled to fly by Venus just weeks after researchers announced finding potential signs of life