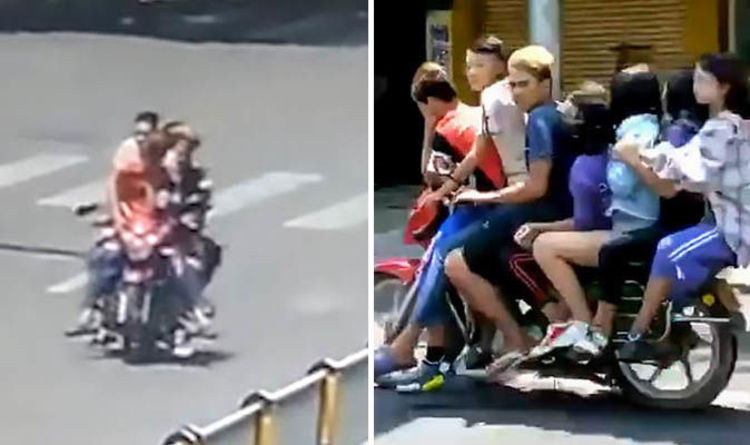 The seriously overcrowded motorbike carrying mostly children was also seen by hundreds of others on the street of Qianwei county in Sichuan province in south-western China.

Footage shared online shows the biker, surnamed Yu, appearing to acknowledge the camera as the car pulls up besides them, while one of his passengers covers his face in shame.

Neither Yu nor any of his passengers, whose ages were not given, were wearing motorcycle helmets, the video shows.

Yu was reported for dangerous driving county authorities confirmed the offence after spotting the stunt on CCTV cameras too.

Yu was tracked down a day later on 28th August and was charged for carrying six passengers on his bike, which is meant to seat two.

The police said Yu was also unable to produce a driving licence, while he told the authorities he did not realise he was breaking the law.

For driving without a licence, failing to wear a helmet and overcrowding his vehicle, Yu was given 10 days of administrative detention and fined 1,150 RMB (130 GBP).

His passengers, who all appear to be minors, were let off with verbal warnings.

Iran nuclear deal: Why US 'snapback' sanctions on Iran could fail

The Nigerian drummer who set the beat for US civil rights

It could take a month for Covid-19 patients to clear virus, new research finds

Italy travel advice: Can I travel to Italy? Is Italy on UK quarantine list?