And not in a faux humble I’m so in love I feel it’s appropriate I should talk about how fortunate I am whenever asked sort of way. There’s a part of him that truly doesn’t believe he’s the guy who gets to call himself Ariana Grande‘s fiancé.

Not that he really stews over the point, it just gives him the drive to really savor every minute of every day that he spends with the international pop sensation. “I’m still convinced she’s blind or hit her head or something,” he recently admitted in his cover story for Variety‘s Power of Young Hollywood issue. “Something is going to happen, and she’s going to be like, ‘What the f–k is this thing doing around?’ For right now, it’s rocking.”

The thing is, sometimes his bride-to-be is in disbelief as well. In her 25 years of life, she’s never been treated this well by a man, leading her to know deep down that this is the courtship she was waiting for. “It’s so crazy. It’s been a wild ride,” she shared at the L.A. edition of her Sweetener Sessions Aug. 25. “I don’t know what the f–k I did to get so lucky.”

With each separately marveling at their good fortune, their three-month romance has produced a near constant stream of sickly sweet praise that at times can feel perhaps just a little too much? A bit like your friend who finally started dating a nice guy after years of a–holes and now can’t stop talking about how great he is. Or as the four-time Grammy nominee quipped on Good Morning America this month, “We’re so annoying, huh?”

But those close to the pair say they simply can’t help it. For starters, they’re both on the publicity trail, what with Grande promoting her recently released fourth album Sweetener and Davidson, 24, gearing up for his fifth season on Saturday Night Live. And while they could certainly fill an interview answering questions about their professional accomplishments, all anyone really wants to talk about is their breathy whirlwind of a romance that’s injected a little light and love into an otherwise dreary news cycle and introduced the phenomena that is big-dick energy. (For the uninitiated, it’s that certain swagger a person has when they know they just have it.)

And, frankly, they’re all too happy to oblige when people inquire into their union. “Ari and Pete are obsessed with each other and are totally in love,” one insider tells E! News. “They are actually a really good match.” 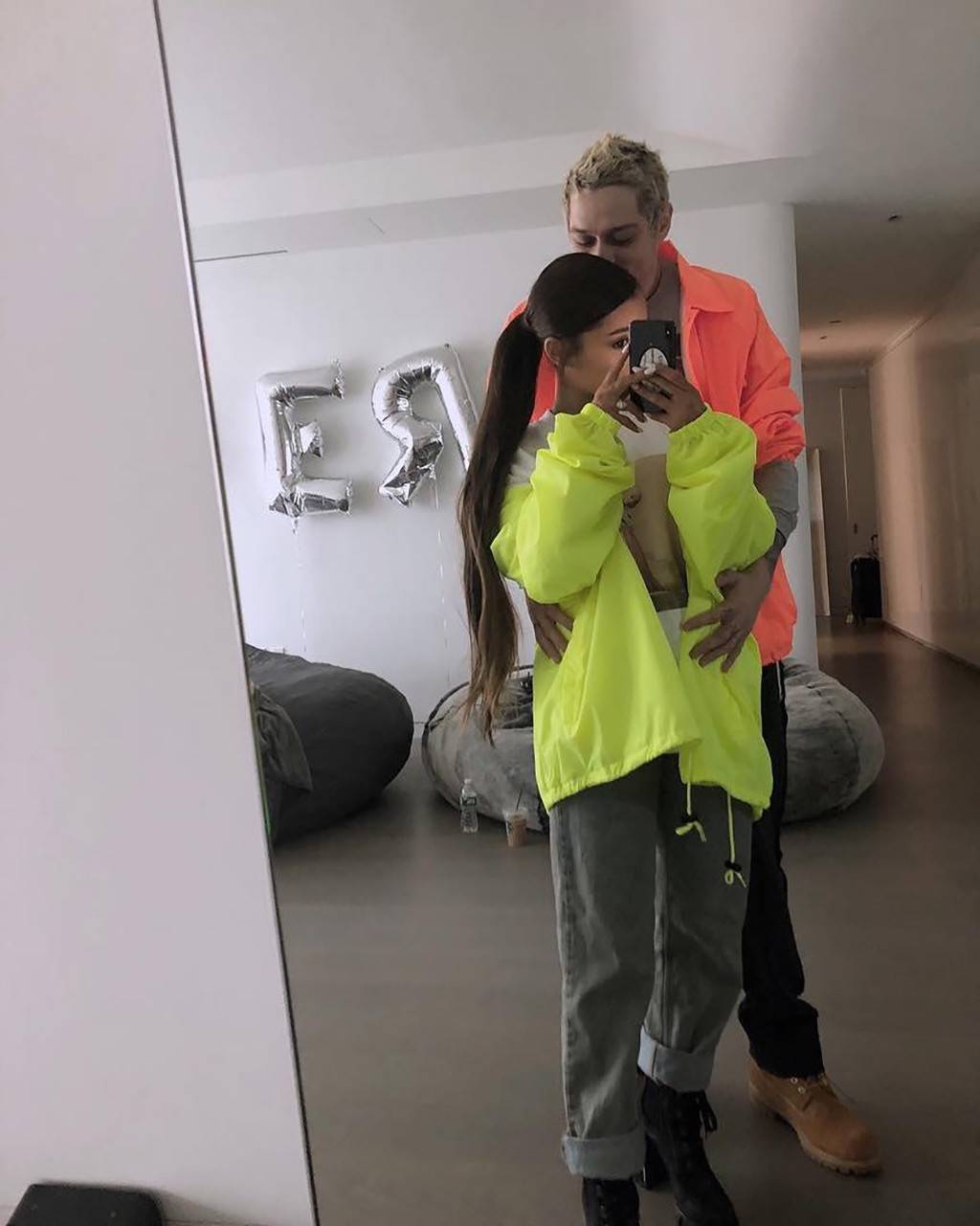 It’s a conclusion they both reached rather quickly. For Grande that realization came right around the moment she left the SNL writers’ room having planned sketches for her March 2016 hosting gig. “I jokingly said to my tour manager—I was like, ‘I’m marrying him 100 percent,'” she recalled on The Tonight Show. “I was like, ‘I’m literally marrying him.'”

As she continued ruminating on her “biggest crush” to her pals, Davidson, who told Variety he spent that week “obviously ogling and trying not to be creepy,” was none the wiser. “We never exchanged number or anything,” Grande admitted to host Jimmy Fallon. “We weren’t even friends for the longest time.”

Nor did they spend much time in the just pals category. Because when Davidson got the chance to romance the “Bang Bang” songstress, following her spring split from rapper Mac Miller and his from Half-Empty executive producer Cazzie David, he had no intention of playing it cool.

“The day I met her, I was like, ‘Hey, I’ll marry you tomorrow,'” he told GQ, presumably referring to their recent, post-SNL reconnection.

Having at least envisioned this moment once or twice while secretly nursing her infatuation, Grande was by no means scared off by his declaration. Instead, she calmly picked out a pear-shaped bauble from the lineup of photos Davidson texted over. “She was calling my bluff,” he told the mag. “I sent her a picture [of engagement rings]. I was like, ‘Do you like any of these?’ She was like, ‘Those are my favorite ones,’ and I was like, ‘Sick.'”

Somewhere in between their tacit agreement of forever, the duo had enough deep dive conversations to learn they really might be in it for the long haul. Both had spent their entire adulthoods in the spotlight with Davidson claiming the title of youngest SNL cast member when he joined the crew at age 20 and Grande being, as the comedian describes, “a super-famous person” since her days on Nickelodeon’s Victorious and Sam & Cat. And each had endured their own separate unspeakable tragedies. For the Staten Island native losing his firefighter father on Sept. 11, 2001 had given him a unique outlook. “To learn how anything can just be taken away from you early gave me this sense of ‘F–k it. Whatever, dude,'” he told Variety. “I’m able to do stand-up and f–k around because hopefully the worst thing that has ever happened to me happened.”

But Grande’s pain was fresher. She struggled in the months after a terrorist killed 22 fans and injured more than 500 others by detonating a bomb outside her 2017 concert in Manchester, England. “I’ve always had anxiety, I’ve had anxiety for years,” she revealed to pal Troye Sivan in an interview for Paper magazine. “But when I got home from tour it reached a very different, intense peak. It became physical and I was not going out at all, and I felt like I was outside my body.”

No stranger to anxiety himself, Davidson, who also deals with Chron’s disease and borderline personality disorder, proved a strong source of comfort. “They bonded over Ari’s Manchester ordeal and what Pete’s been through with his father,” the insider reveals to E! News.

And in the two weeks that passed between Davidson commissioning a three-carat custom sparkler from jeweler Greg Yuna and his having the $93,000 piece in hand, Grande knew she was ready to say yes. “I’m not like a very traditional person, so the fact that I’m even getting married is something I never even saw coming,” she said on the Zach Sang Show. “I never saw that coming, like, I never wanted that, like, I was, ‘F–k that, there’s no point.’ I was like, ‘What’s the point?’ And then I kinda understood it when it was like, with the right person.” 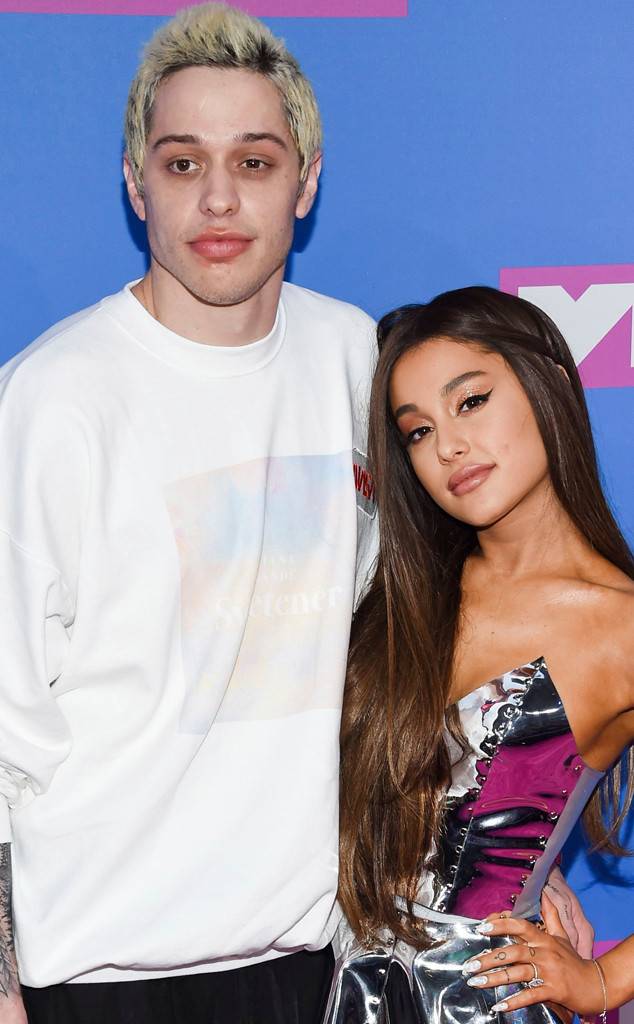 The right guy who knew how to pull of the perfect non “googly” proposal: “We were just like hanging out and he had a ring and he just asked me,” she recounted. “It was really sweet. He didn’t get on the knee or anything, thank God.”

Instead he presented her with his creation as they were in bed in their new shared $16 million apartment. “I didn’t want to do something corny,” he noted to Variety. “I was like, ‘Will you marry me?’ It was really dope.

Rather than make some big announcement, or even post a not-so-subtle hand selfie, Grande simply slipped the oversized diamond onto her left hand, shared the news with her closest friends and waited for the rest of the world to catch on.

It was only then that the true hysteria began, with paparazzi tailing the betrothed pair to see what they’d do next (answer: happily walk through the streets of NYC and indulge in a little light karaoke) and the internet more or less exploding as fans divided themselves into two camps: those that immediately declared the in love duo #relationshipgoals and the ones who were certain they were moving much too fast. 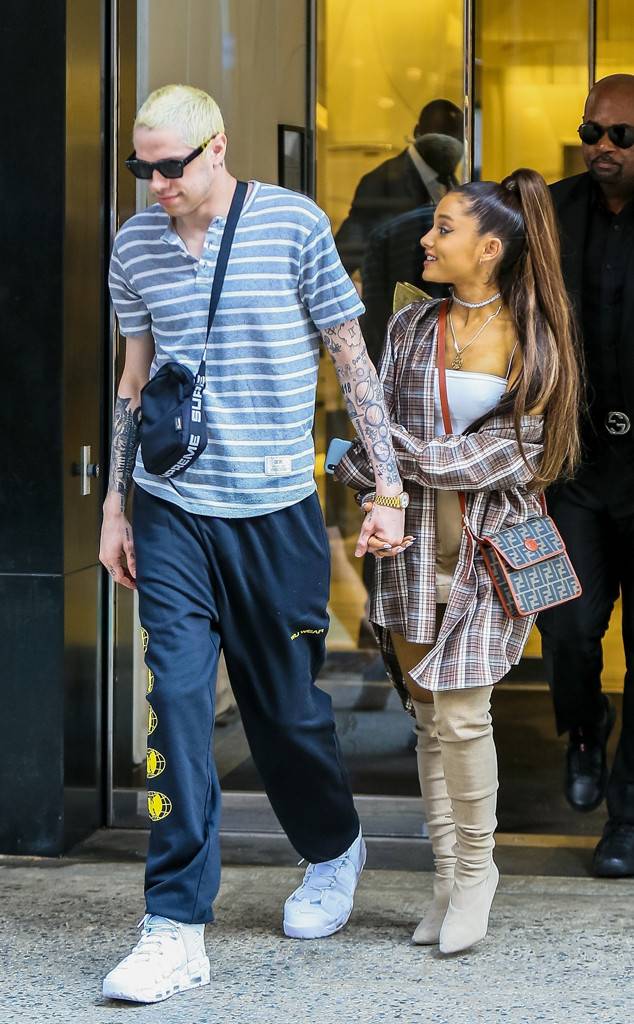 Mark the duo down as indifferent. As in, they don’t really care what anybody thinks. Followers have taken umbrage with everything from Davidson’s decision to let her wear his late father’s FDNY badge necklace to Grande naming a musical interlude “Pete Davidson” because, as she explained to Paper, “I didn’t know what else to call it. I played it for Tyler, the Creator and he was like, ‘I guess that title makes sense because if I wrote a song about how much I loved waffles and syrup I’d call it ‘Waffles and Syrup.'”

But, they reasoned, that’s what you do when you’re super, super, super in love. Grande is “the greatest person I know,” he said of gifting her the pendant. “I gave it to her because she has my heart and that is the most precious thing I own. My dad would be so happy and love her so much.” And why shouldn’t she lionize her future husband in verse? “He’s my fiancé. This is my album. I’m an honest and emotional artist and human being and if my openness in my work isn’t for you, that’s OK.” 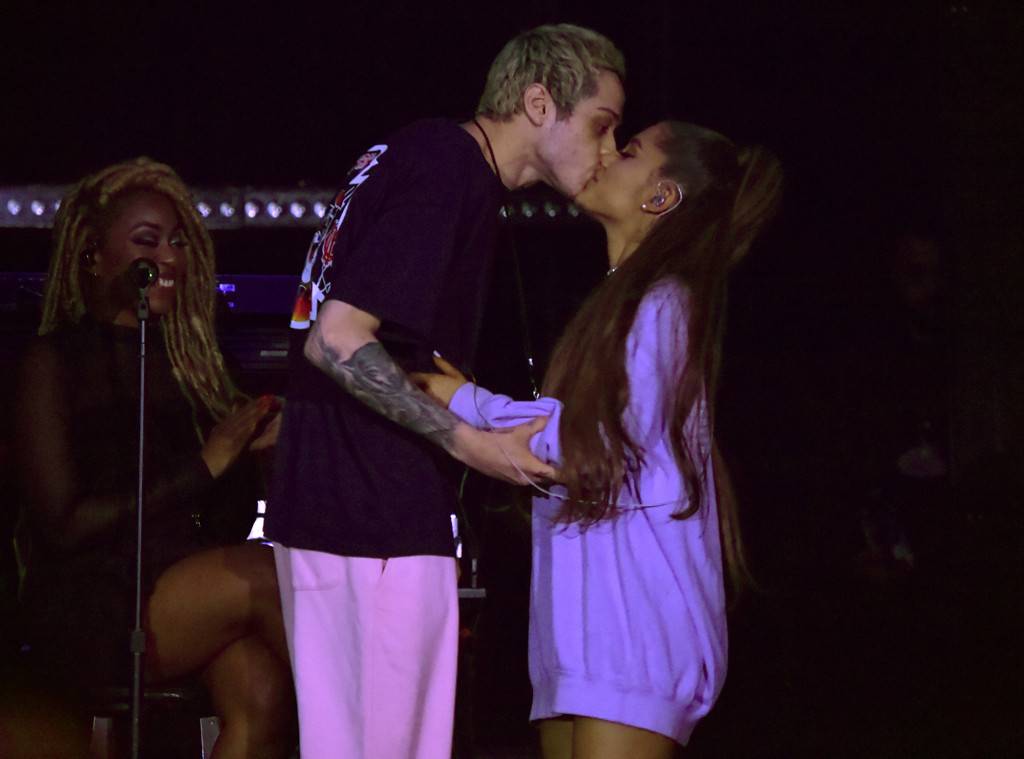 Because for all those doubting their pairing, there are plenty eager for more details, fans who want to understand just how two people can be so certain in such a short amount of time and perhaps those hoping if they get close enough to the couple’s obvious infatuation a little of that magic will rub off on them.

The self-described soulmates are all too happy to oblige. “You just feel it, you know? All of it,” she explained to Michael Strahan on GMA. “He just ticks every box, and just gets better every day, and I’m very grateful for him.”

Same, said Davidson, giving an expectedly raunchier version of her answer during an Aug. 23  appearance at Alabama’s Auburn University. “What’s it like being engaged to Ariana? It’s like what you would think it was like, but, like 100 times sicker,” he shared. “It’s f–king lit. I’m a very, very lucky boy, and I’m very, very loved and I’m very lucky. And my d–k’s forever hard.”

It may not land quite as well as a punchline, but his heart is forever full, too.

As one pal put it to ET, their personalities have blended to form a relationship that just needed to proceed at a break-neck pace. “The combination of a girl who is yearning to be loved and mixing it with a guy like Pete creates this intense relationship that is moving a million miles a minute,” the source explains. “For both of them, this relationship is heaven compared to their past relationships and they’re just clinging to that heaven and thrilled about it.”

And so each time people ask what it’s like to be caught up in this tornado of passion, infatuation and pure joy, they’re doing their best to verbalize it.

“I can’t even put into words how great of a person she is. I could cry,” he offered to Variety. “She’s the f–king coolest, hottest, nicest person I’ve ever met.” These days, as he looks around their shared 4,000-square-foot pad, the one he jokes he feels lucky to be allowed to live in, well, sometimes he simply can’t believe it.

“I’m f–king living the goddamn dream,” he said. “I feel like I’m living in a fantasyland.”