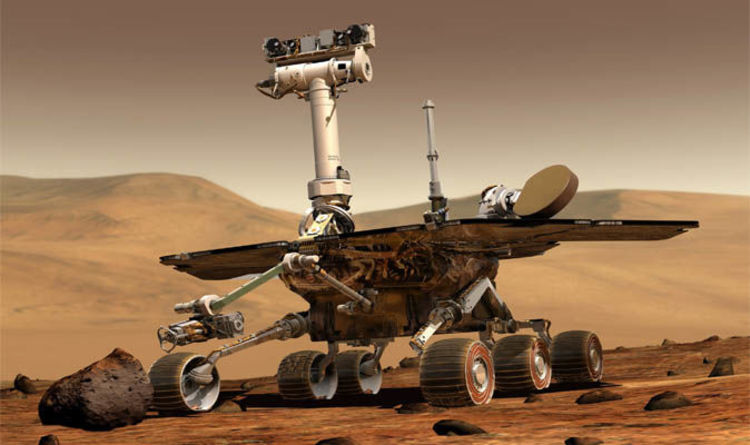 The Martian rover has been silent for close to three months now after the robot was powered down to weather the storm.

More than 80 days ago NASA’s scientists put Opportunity to sleep in a bid to conserve its solar-powered batteries.

The Martian sandstorm has grown beyond control since it first began brewing in May this year, completely blocking out the skies.

NASA’s mission investigator Steve Squyres now fears there is nothing that can be done but to wait and listen for Opportunity.

He told Space.com: “We simply don’t know what’s going to happen. There’s only one way to find out and that’s to listen.”

The 15-year-old Martian buggy hunkered down on June 12 as the storm engulfed the Red Planet.

Opportunity was first suspended on June 8 in a bid to wait out the storm but the monstrous weather phenomenon grew beyond expectations.

Since June 10 NASA has had absolutely no contact with the robot.

The main bulk of the plan involves NASA intently listening for any sign the rover may be powering up its systems.

In the event Opportunity wakes from its deep slumber the robot will ping a signal back to NASA to alert the space agency of its status.

“This mode cases the rover to hibernate, assuming it will wake up at a time when there’s more sunlight to let it charge.”

In a worst case scenario, the rover could have been damaged by the raging storm or left completely inoperable.

According to Dr Squyres one of the biggest threats to the rover are the freezing temperatures observed on Mars.

The chilling days devoid of sunlight could irreparably damage the rover if they drop too low – but the space agency does not know just how low is low.

Dr Squyres said: “If things get too cold, that can break.”

The good news is the storm is slowly settling down and the skies over Mars are starting to clear.

NASA will have to wait for the skies to clear enough for sunlight measurements to reach a value of less than 2.0 tau for the rover’s batteries to recharge.

Tau is a measurement of who much sunlight cannot break through the atmosphere. The higher the number the less sunlight is visible.

The last tau measurement taken by Opportunity stood at 10.8 tau on June 10.

Dr Squyres said: “It’s either going to be a miraculous recovery, or an honourable death.”

Google Maps will show data on coronavirus outbreaks in your region

People across the US have relied on KN95 face masks for protection. But the majority imported from China have failed safety standards.

E.P.A. Rejects Its Own Findings That a Pesticide Harms Children’s Brains

The toilet on the NASA spaceship slated to fly astronauts to the moon has 'odor control challenges,' according to a top engineer

Covid-19 news: Volunteers to be infected with virus to test vaccines