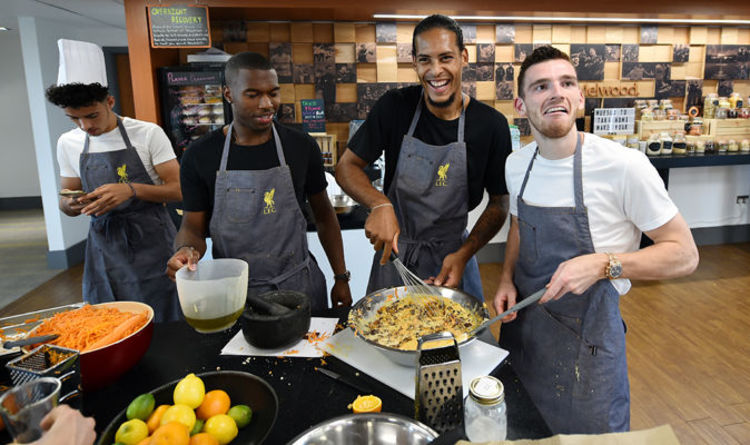 Liverpool stars were in for a messy surprise after being forced to bake cakes for the whole squad after losing a challenge in training.

The squad were set challenges throughout the session, and the losing team were put to work in the club kitchen.

Andrew Robertson and Virgil van Dijk headed up the operation, while Naby Keita and Daniel Sturridge were also involved.

Youth team player Curtis Jones was also roped into the forfeit while Liverpool’s trumphant star men laughed at their expense.

Roberto Firmino and Alberto Moreno shared jokes with the group as they watched the forfeit unfold.

Spanish left-back Moreno couldn’t resist digging in for a bite as the process got underway, while Joe Gomez stirred up the laughter by filming the work in progress.

Van Dijk demonstrated his leadership qualities as he organised his men into an effective unit, and Naby Keita added moments of flair when required.

Robertson was happy to assist, though Sturridge settled for a minor role in the mini-squad of players.

Manager Jurgen Klopp arrived on the scene to enjoy laughing at his stars, before tucking into the fruits of their labour.

The Liverpool squad appear to be a close-knit group based on recent images of the team sharpening up during training sessions.

Spirits will be high in the camp after a terrific start to the season has led the Reds to three wins without conceding a goal.

Take a look through the images below for the best snaps of Liverpool players’ baking skills being put to the test.

Iceland vs England PLAYER RATINGS: Kyle Walker has lost his place after being sent off