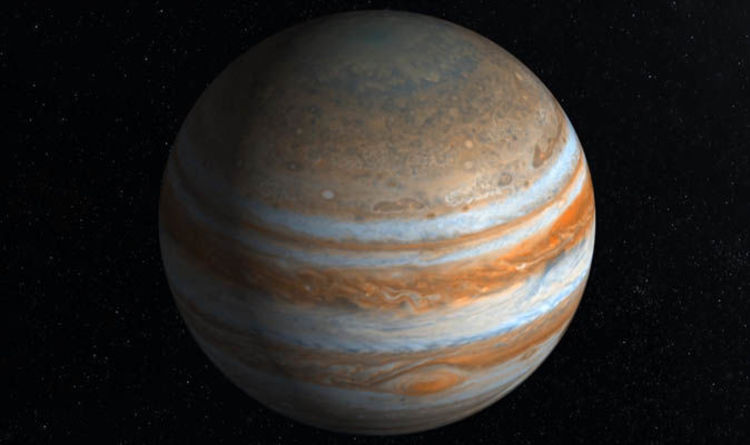 Astrophysicists at NASA’s Goddard Space Flight Center in Greenbelt, Maryland, claim to have come one step closer to the discovery.

The researchers found Jupiter may contain between two to nine times more oxygen than the Sun.

The findings were presented in a recent paper in the Astronomical Journal.

NASA said in a statement: “The revelation was stirring given that the team’s experiment could have easily failed.

“The Great Red Spot is full of dense clouds, which makes it hard for electromagnetic energy to escape and teach astronomers anything about the chemistry within.”

But Dr Bjoraker said the Jovian clouds were less thick than assumed which aided his team’s ground-based observations.

The NASA scientist said the discovery was a “pleasant surprise”.

But what do all of these findings mean for the possibility of life developing on Jupiter?

NASA said: “Water is a significant and abundant molecule in our solar system.

“It spawned life on Earth and now lubricates many of its essential processes, including weather.

“It’s a critical factor in Jupiter’s turbulent weather too and in determine whether the planet has a core made of rock and ice.”

NASA cannot say for sure whether life exists on the gas giant, but the planet’s environment is incredibly inhospitable to any Earth-based organism.

Because the planet has no solid surface, any living creature on Jupiter would have to float or fly to survive.

The US space agency said: “Still, at certain altitude’s in Jupiter’s atmosphere, there do exist chemicals that are necessary for some sort of exotic life form.

“The temperatures are warm enough and flashes of lighting could provided energy that drives the chemical reactions needed for life.”

The real prime candidate for life outside of Earth could be Jupiter’s moon Europa.

In May this year NASA found evidence of Europa shooting out plumes of water into space – a sign the lunar satellite has the markers for life to exist.

Elizabeth Turtle, a planetary scientist from John Hopkins University, said: “We know that Europa has a lot of the ingredients necessary for life, certainly as we know it.

“But the habitability of Europa is one of the big questions that we want to understand.”

The scientist said Europa’s vast subterranean ocean, encased in a shell of ice, is most likely the most habitable part of the moon.

The ocean is warmer than the rest of the moon and the thick shell of ice surrounding it protects it from hazardous radiation.

Covid-19 news: New restrictions in the UK as alert level raised to 4

Matthew Yglesias Thinks There Should Be ‘One Billion Americans’

What are the micro-organisms causing elephant deaths in Botswana?