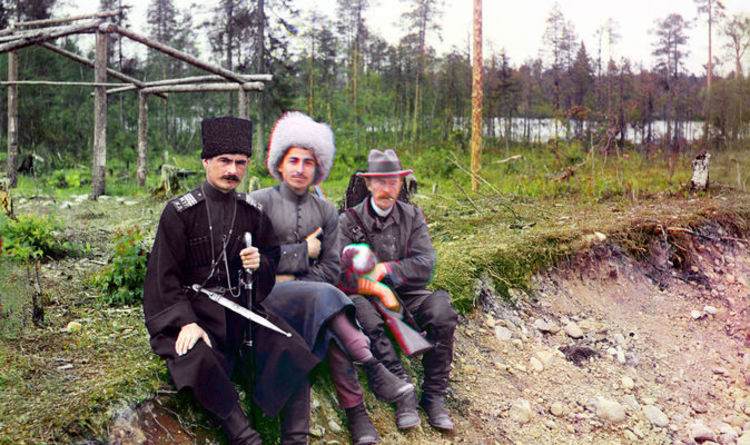 Prokudin-Gorsky received today’s temporary Google logo alteration in honour of what would have been the chemist and photographer’s 155th birthday.

He is celebrated for his landmark work in colour photography, travelling extensively across Russia to record the lives of everyday Russians.

Prokudin-Gorsky pioneered the use of colour separation method, using his chemistry knowledge to develop three-image colour photography to create photos in quality colour.

Today’s Google Doodle is an animation showing a hand composing the Google name through the shifting of images and colours, in a nod to the Russian’s chemistry skills.

Who was Sergey Prokudin-Gorsky?

His family were part of the Russian nobility and Prokudin-Gorsky came from a long line of military figures.

They later moved to Saint Petersburg where the young Prokudin-Gorsky completed his studies.

He undertook chemistry at Saint Petersburg State Institute of Technology in addition to music and painting at the Imperial Academy of Arts.

He married his wife Anna in 1890, before they went on to have three children together.

Prokudin-Gorsky’s revolutionary work in colour sensitisation began in 1902 after he studied under the tutorage of photochemist Adolf Miethe in Berlin, one of the early pioneers of colour photography.

He returned to Russia and began developing his own techniques at his photography lab, which he established the year before in Saint Petersburg.

Soon after he began touring the nation, documenting Russian society, including architecture as well as people, in thousands of photographs which won him international acclaim.

He honed his techniques in a mobile darkroom on a railroad car, given to him by Tsar Nicholas II who he had earlier impressed with his images.

What was Prokudin-Gorsky famous for?

Prokudin-Gorsky’s most notable achievement was the portrait of Russian author Leo Tolstoy.

His alluring colour photo of the War and Peace author was reproduced countless times in prints and postcards.

Prokudin-Gorsky became the elected president of the Imperial Russian Technical Society in 1906.

He was also a member of the Royal Photographic Society between 1920 and 1932.

Prokudin-Gorsky died on September 27, 1944 in Paris, just one month after the liberation of Paris.

His body of work is today preserved by the US Library of Congress and thousands of his negatives were digitised in 2000.