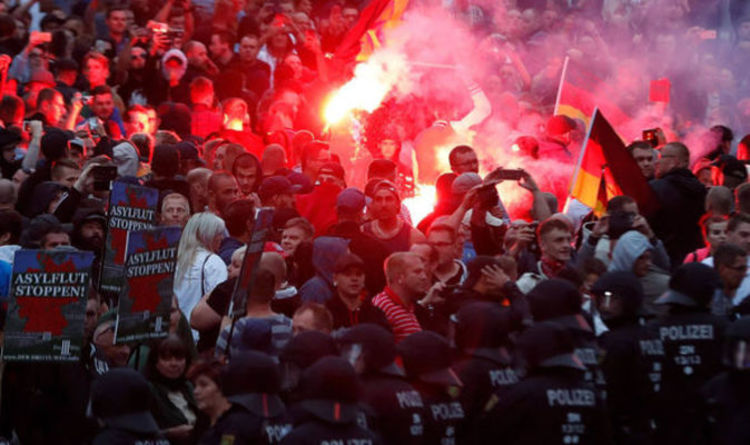 The man, who cannot be named, was walking home in Wismar, a city in northern Germany on the Baltic Sea, when the vile trio began shouting xenophobic comments in German.

Two of the men punched him in the face then the third hit his shoulder and ribs with an iron chain.

They then kicked him on the ground.

Details of the victim’s ethnic background have not been released.

Police are urging witnesses to come forward with any information.

The incident happened just days after protests in Chemnitz when around 5,000 far-right protestors marched the streets and protested against 1,000 opponents on Monday.

German police fear a mole in the force sparked the neo-Nazi riots after an arrest warrant that names one of the chief suspects in a stabbing was leaked.

A stabbing was allegedly carried out by an Iraqi and Syrian on Sunday, leading to protestors, taking to the streets and chanting slogans against ‘criminal foreigners’.

On Monday, police said they had arrested a Syrian man, 23, and an Iraqi man, 22, on suspicion of stabbing German man Daniel H, 35, to death on August 26.

The brawl had taken place at a street festival and two other men, aged 33 and 38, were hospitalised after the fight.

The motivation for the fight is not currently known.

The protests on Monday have revealed a worrying divide in Germany after the Chancellor Angela Merkel opened the doors to more than one million migrants – mostly from war-torn countries in the Middle East – since 2015.

Protestors chanted “We are the People” and the Nazi-era term “Luegenpresse”, meaning lying press, as well as holding placards with anti-refugee statements.

Others brandished far-right Alternative for Germany and Neo-nazi signage.

Separated by a line of police, the opponents held up banners with slogans such as “Rule of Law, not Vigilante Justice”.

The groups threw bottles and fireworks at one another, triggering the police to deploy water cannons to quell the violence.

Police warned masked protestors, who were picking up stones, that their actions were being filmed.

Several people were left injured from both sides.

Speaking at a news conference in Berlin, Mrs Merkel, branded the bloody event as a “horrible incident”, adding that citizens taking the law into their own hands is something that has no place in a state under the rule of law.

Mrs Merkel’s spokesman Steffen Seibert echoed her statement, saying that “riotous assemblies, the hunting down of people who appear to be from different backgrounds or the attempt to spread hate in the streets have no place in our country”.

Trump threatens to retaliate with '1,000 times greater' force against any Iran attack

Yemen is starving: How aid cuts by the US and allies are pushing millions towards famine

Russian Intelligence Hackers Are Back, Microsoft Warns, Aiming at Democrats and Republicans

Google Home too chatty? Try these tips to hush it up