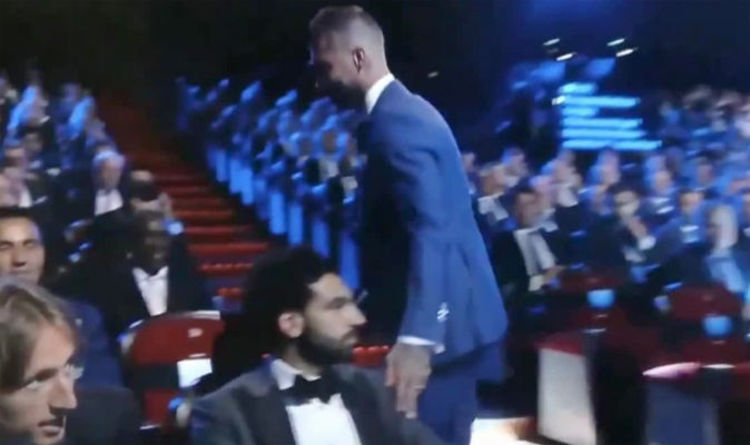 Ramos controversially injured Salah’s shoulder after a tussle during the Champions League final between Liverpool and Real Madrid back in May.

The injury ended Salah’s participation in the final and put his World Cup hopes in serious doubt.

While Salah did go on to recover and feature for Egypt during the tournament in Russia, Liverpool fans were left fuming with Ramos over the challenge on their star man.

And Ramos has once again annoyed the Anfield faithful.

The Real Madrid defender is in Monaco for the Champions League draw, along with Reds man Salah.

Ramos was presented with the award for Best Defender during last year’s competition during the draw.

However, when returning to his seat – which was directly behind Salah – after collecting his award, Ramos touched the Liverpool ace on the shoulder

But Ramos has infuriated Liverpool fans once again.

“Sergio Ramos has the audacity to tap Mo Salah on the shoulder as he walks past…” one fan wrote.

Another said: “Ramos touching Salah’s shoulder when Ramos clearly knew he clearly injured him in the final. Biggest t**t in football.”

“Very cheeky move by #Ramos touching #Salah on the should after winning the #UEFA defender of the year award!”

After Salah was forced off in the first half of the Champions League final, Real Madrid went on to beat Liverpool 3-1.

Following a goalless first half, Karim Benzema opened the scoring after the break.

Meanwhile, the Reds have been drawn in Group C with PSG, Napoli and Red Star Belgrade for this season’s competition.

'They've forgotten us': Thousands of Australians stranded overseas in the face of government's stringent border controls