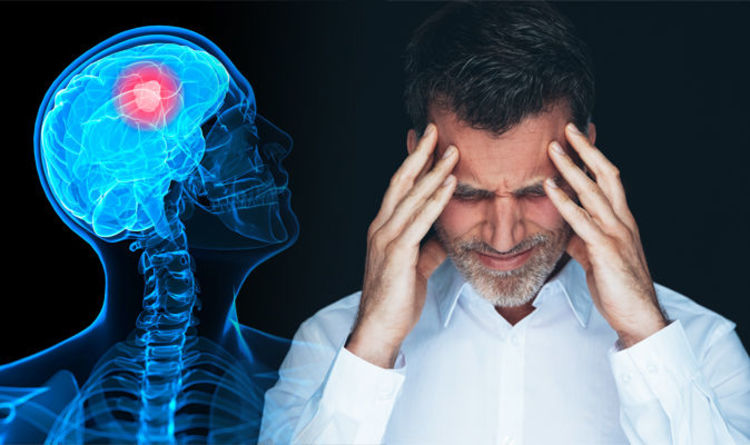 Brain tumour symptoms can vary depending on the type of brain tumour, which part of the brain has been affected and how big the tumour is.

While the symptoms aren’t always caused by a brain tumour, it’s still important to recognise them and contact your GP as soon as possible.

Increased pressure on the brain from the tumour can cause:

Symptoms as a result of the position of the tumour in the brain:

The NHS advises that brain tumours, while rare, can affect people of any age, including children.

What causes brain tumours? It’s  unknown, but there risk factors that can increase your chance of getting the disease, according to Cancer Research UK.

People can get brain tumours at any age, says the research charity. It explains: “As we get older out risk of brain tumours increases. But there are many different types of brain tumour and some are more common in younger people.”

Exposure to radiation has also been found to be a risk factor, but this only accounts for a very small number of brain tumours.

People who have had cancer as a child have a higher risk of developing a brain tumour later in life, says Cancer Research UK.

It adds: “People who have had leukaemia, non Hodgkin lymphoma or a glioma brain tumour as an adult also have an increased risk.

The research charity explains: “Your risk is higher than other people in the general population if you have a parent, brother or sister diagnosed with a brain tumour.”

This can increase the risk of some types of brain cancer. It advises: “Try to keep a healthy weight by being physically active and eating a healthy, balanced diet.”

People with HIV or AIDS have around double the risk of being diagnosed with a brain tumour compared to the general population, according to Cancer Research UK.

Should You Break Up?

Tanqueray, Humans of New York Star, Brings in Over $1.5 Million in Donations

Mandelbrot by Way of Florida

Remembering the Epic Parties of Harry Evans and Tina Brown

A Spread Worthy of Royalty

Getting Climate Into the Presidential Debates