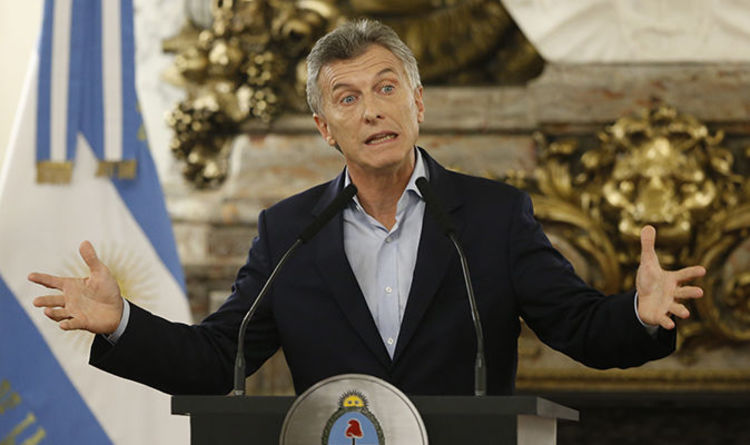 The IMF said it was studying the request from Argentina to speed up disbursement of the $50 billion loan.

The Argentinian peso dropped more than seven percent on Wednesday, its biggest one-day decline since the currency was allowed to float in December 2015.

He said: “We have agreed with the IMF to advance all the necessary funds to guarantee compliance with the financial program next year.

“This decision aims to eliminate any uncertainty. Over the last week we have seen new expressions of lack of confidence in the markets, specifically over our financing capacity in 2019.”

And he assured Argentinians everything was being done to avoid a collapse of South America’s third-biggest economy.

He said: “I know that these tumultuous situations generate anxiety among many of you.

“I understand this, and I want you to know I am making all decisions necessary to protect you.”

It comes on the same day the Indian rupee also plummeted to an historic low.

India’s rupee has dropped to 70.8100 against the US dollar, an all-time low and a more than 10% drop since the start of the year.

Ms Rao said: “Markets get a sense that the authorities are tolerant of a weaker rupee, with little by way of jawboning or verbal intervention.

“With the US Fed expected to gradually tighten policy rates in the rest of 2018 and in 2019, lingering trade war fears and jump in dollar demand domestically.

“Volatility is here to stay.”