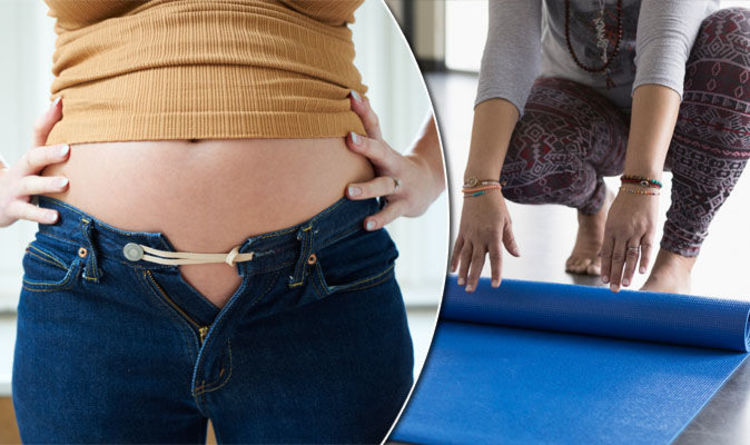 Most people have experienced stomach bloating at some point during their lifetime, particularly during the festive season, according to the NHS.

The condition causes the tummy to feel stretched and puffy, and for some people, it can be more than a temporary issue.

The best ways to get rid of stomach bloating are changing your diet, or doing some yoga exercises.

Certain yoga poses could relieve signs of painful bloating, as well as massaging the stomach muscles, according to AXA PPP Healthcare.

One of the best yoga poses to reduce bloating begins on the floor, on all fours.

Place your hands directly behind your shoulders, with your knees directly under your hips.

While keeping your spine straight, slowly extend your right arm so it’s in line with your shoulder.

“At the same time, lift your left leg so your heel is in line with your hips,” it said.

“Aim to create a straight line from your right arm all the way through to your left foot.

“Hold this position for a second, then very slowly start to bring your right arm in underneath your body, at the same time as drawing in your left knee.

“Allow your back to arch as if you are being pulled up by a belt.

“Hold this for a second then, on the same leg and arm, repeat for a minimum of ten times. Then rest and repeat both sides.”

Avoid doing the exercise after a big meal, although it’s fine to do after a quick snack.

“It is important that you do not rush this, so focus on performing this movement in a slow and controlled manner,” added AXA PPP Healthcare.

The exercise will reduce any feelings of bloating, while also aiding the peristalsis process – the wave-like muscle contractions that helps to move food into different parts of the digestive system.

Going for a short walk could also help to improve digestion, and lower the risk of feeling bloated.

Walking boosts the metabolism, as well as kickstarting the digestive system, it said.

Stress may also be causing your stomach bloating. Doing regular exercise is one of the best ways to avoid stress.

Bloating could be caused by eating too much food, or by swallowing air, said the NHS. Skipping meals, or talking with your mouth full, could aggravate your bloating pain.

Speak to a GP if bloating symptoms don’t disappear. Persistently feeling full could be a warning sign of ovarian cancer in women.

Type 2 diabetes: The foods proven to reduce your risk of developing the chronic condition

Apple iMac 27-inch review: the best iMac you can buy …but that might not be true for long

Parkinson’s disease symptoms: Key sign of the neurodegenerative condition to look out for

A Season of Grief and Release: 5 Months of the Virus in New York City

Hair loss treatment: What you need to know about a hair transplant

Paper Mario: The Origami King Has a Princess Peach Problem

Alyssa Milano Reveals She Had Coronavirus: 'I Thought I Was Dying'