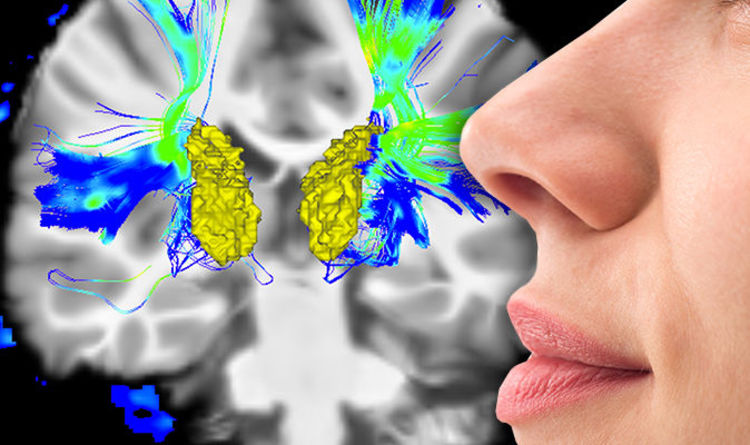 Parkinson’s disease a brain condition that causes symptoms to become progressively worse over a number of years, according to the NHS.

It’s caused by a loss of nerve cells in a part of the brain known as the substantia nigra.

But, you could also be at risk of the brain condition if your sense of smell gets worse over time.

While many people that have a reduced sense of smell won’t have Parkinson’s disease, most Parkinson’s patients have smell loss, according to charity The Michael J. Fox Foundation for Parkinson’s Research.

The exact link to the condition isn’t entirely understood, but it may be caused by the disease starting in the olfactory bulb – part of the brain that controls smell.

But, while hyposmia – a reduced sense of smell – is often overlooked, it could be caused by a number of different underlying medical conditions, including allergies, anaemia, or even nasal polyps.

The loss of sense of smell may develop over a number of years, so it may be difficult to spot.

“Loss of sense of smell is often overlooked by diagnosing physicians as an early sign of Parkinson’s disease,” said the charity.

“Early detection is a crucial step to understanding the causes of and developing better treatments for Parkinson’s disease.

“Loss of sense of smell is a common but little noticed symptom that may occur years before the onset of motor symptoms or a Parkinson’s disease diagnosis.

“The majority of people with Parkinson’s disease experience some smell loss.

“Though many people with smell loss do not develop Parkinson’s, it seems to be the first symptom for many who do.”

Patients could reduce symptoms of the disease by making some small dietary changes, it’s been claimed.

The nuts’ antioxidant properties are believed to be behind their benefits for Parkinson’s patients.

You should speak to a GP if you’re worried about the signs or symptoms of Parkinson’s disease, said the NHS.

About one in 500 people are affected by the disease. That’s the equivalent to about 127,000 people in the UK with Parkinson’s.

Arthritis treatment: Drinking this type of milk may slow down your symptoms

A Nip for That New Year’s Toast

Car insurance: Police cracking down on uninsured vehicles in this area in major warning

Their Dream Was a Working Farm (But They Weren’t Farmers)

How to opt-out of being an organ donor