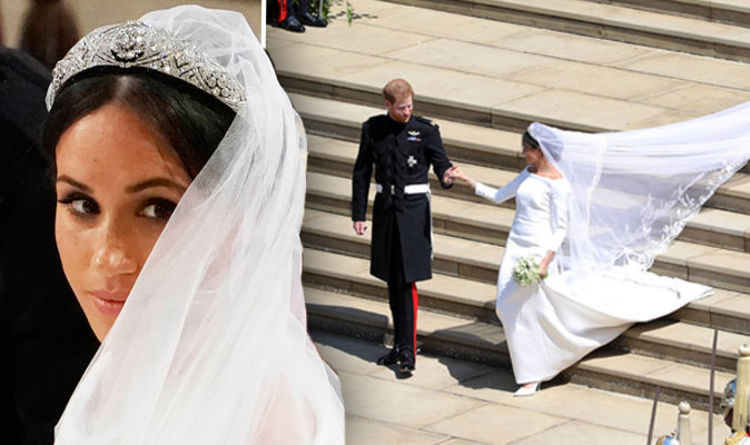 Meghan Markle, 37, made headlines all around the world when she married Prince Harry in May.

In the run-up to the wedding, there was much speculation as to what Meghan would wear, with keen fans eager to know what the highly-anticipated dress would look like.

When the Duchess did finally emerge, on the 19th May, the world was stunned by the elegant Claire Waight Keller for Givenchy gown.

Seen only in photographs or at a distance, the dress is now going to be seen up close and personal by the public, going on display at an upcoming exhibition.

Meghan’s ivory silk wedding dress and tiara are set to form part of the exhibition, A Royal Wedding: The Duke and Duchess of Sussex.

The exhibition is taking place at Windsor Castle, the location of the Royal Wedding, from 26 October.

The stunning dress is made of silk and features three-quarter-length sleeves, a bateau neckline and a train with built-in triple silk organza underskirt.

Effortlessly plain and simple, the dress was finished off with an impressive five-metre long veil.

The veil featured hand-embroidered flowers on its hem and “symbolic crops of wheat”.

The flowers all had a special meaning, with Meghan choosing her two favourite flowers, wintersweet (which grows outside Nottingham Cottage) and the California Poppy, along with flowers representing the Commonwealth.

At the exhibition, the public will be able to gaze upon all of Meghan’s bridal attire, including the famous Queen Mary Lozenge Bandeau Tiara.

The Queen Mary tiara is an art deco-style diamond and platinum tiara, first belonging to Princess Mary, and having been worn by Princess Margaret.

The stunning piece of jewellery was lent to Meghan by the Queen, and is studded with diamonds and features a detachable brooch in the centre.

A copy of Harry’s Savile Row-tailored uniform will feature at the exhibition, which will begin at wedding site Windsor Castle before making its way up to Holyrood Palace.

The specially commissioned frockcoat uniform of the Blues and Royals was made by Dege & Skinner and paired with a pair of trousers made of blue and black wool barathea.

The exhibition, A Royal Wedding: The Duke And Duchess Of Sussex will be at Windsor Castle from October 26 to January 6, and at Holyrood Palace from June 14 to October 6 next year.

The Duchess of Sussex’s Givenchy dress is reported to have cost the Duchess around £387,000, with her reception dress estimated to be worth £199,555.

White in colour and featuring a halter neck and sultry open back, the dress was worn by the Duchess to her wedding reception at Frogmore House.

Brought Together by a Friendly Cupid

A Playlist of Your Favorite Cover Songs

Inside the Social World of Shift-Scheduling Apps

'Global car sales 'will not recover until 2025'

Prince William And Kate Middleton Show Prince Harry Some Love On His Birthday Despite Rumored Drama!