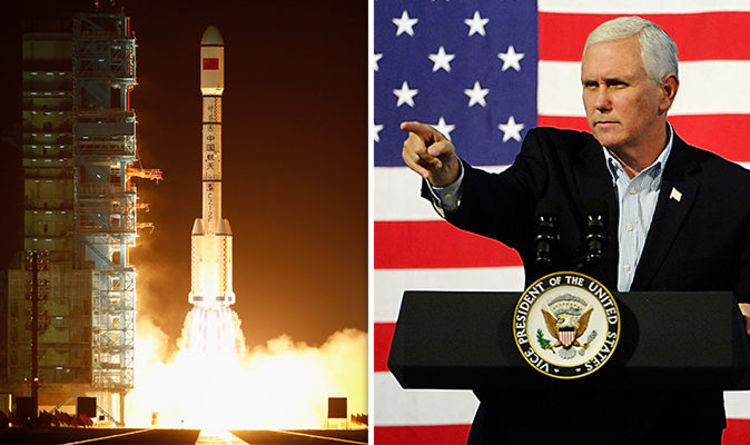 Beijing, supported by Moscow, submitted a draft treaty on the Prevention of the Placement of Weapons in Outer Space in 2008 and provided an updated draft in June 2014.

China’s Foreign Ministry said on Tuesday the multilateral agreement on the control of arms in space must be adopted to ensure peace and security.

The news comes after US President Donald Trump proposed to build a US “Space Force” earlier this month.

In its Position Paper for the 73rd session of the UN General Assembly, the Chinese Ministry said: “The Chinese government stands for the peaceful use of outer space and opposes weaponisation and arms race in outer space.

“China calls on the Geneva Conference on Disarmament to conclude a multilateral treaty on space arms control based on the draft proposed by China and Russia as early as possible, so as to effectively uphold peace and security in outer space.”

According to the document, China has always sought the complete prohibition and multilateral disarmament of nuclear weapons, while maintaining its nuclear capabilities at the minimum level required to ensure national security.

The United Nations established a Group of Government Experts on the Prevention of an Arms Race in Outer Space at the initiative of Beijing and Moscow, the paper noted.

The document also pointed out: “China supports the efforts of the international community to reduce the operational status of nuclear weapons, opposes research and development of low-yield nuclear weapons and other negative measures that may lower the threshold for the use of nuclear weapons.

“China is willing to work with all parties to reduce the risk of a nuclear war and maintain global strategic balance and stability.”

US Vice-President earlier this month announced plans to develop a US “Space Force”.

Speaking at the Pentagon, Mr Pence said he hoped to secure the new service by 2020.

The 59-year-old US Vice President claimed a space force was required to ensure America’s “dominance” in space, amid growing antagonism and threats from China and Russia.

He said: “The United States Space Force will strengthen our security and ensure our prosperity, and it will also carry American ideals into the boundless expanse of space.

“All other nations increasingly possess the capabilities to operate in space – not all of them share our commitment to freedom, private property and the rule of law.”

In response to a US report on Chinese military developments over the past year, China called on the US to abandon its “Cold War mentality”.

In a statement, China’s Ministry of Defence said: “We demand that the US side abandon the Cold War mentality, to view China’s national defence and military construction with objective rationality.”

What is the new US Space Force?

Trump on peaceful transition if he loses: 'Get rid of the ballots' and 'there won't be a transfer'

Michael Jordan and Denny Hamlin team up to start NASCAR team, with Bubba Wallace as a driver