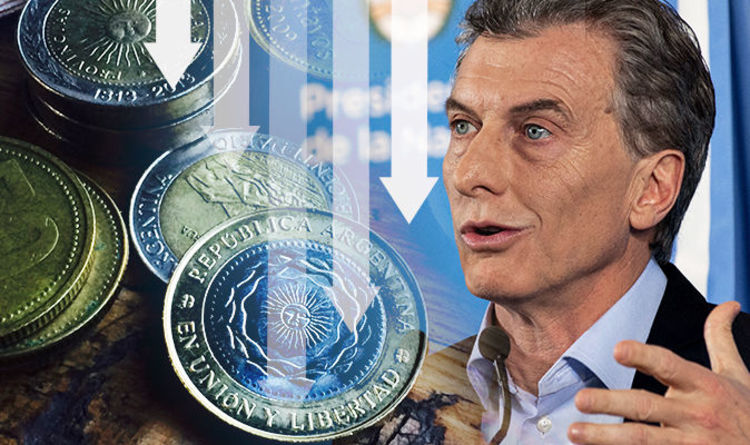 In June, the crisis-hit South American country received the first £11.5bn ($15bn) payment from the IMF, with the government expecting to receive an additional £2.3bn ($3bn) in September.

Mr Macri has not said how much more he wants from the multi-billion dollar fund, but IMF economists and technicians are in Argentina this week for meetings with government members to review portions of the agreement.

In a televised address, the President said: “We have agreed that the IMF will forward all the funds necessary to guarantee compliance with next year’s financial program.

“This decision aims to eliminate any uncertainty that was created before the worsening of the international outlook.”

The request to the IMF comes after the Argentine peso continued to plummet sharply for the eighth successive day, falling one percent to a record low of 31.65 per dollar early on Wednesday.

Argentina’s economic crisis has seen the country’s currency fall by 40 percent this year and a staggering 12 percent in August alone.

It is the worst performing currency in emerging markets, which have suffered recently as investors sought out safer assets amid the mirroring economic crisis in Turkey with the lira.

Earlier this week, financial services and ratings specialist Moody’s warned that Argentina was sliding into a recession that could continue well into 2019.

Argentine 10-year note dollar bonds were also down 0.56 cents to 75.59 cents on the dollar, sending its yield stating 11 basis points to a near-record 9.94 percent.

On Monday, Treasury Minister Nicolas warned the Argentine economy will contract one percent in 2018, significantly down from a three percent growth forecast earlier in the year prior to the first part of the loan from the IMF.

In a further blow for Mr Macri, data from the University of Torquato Di Tellato showed confidence levels in his government fell 1.94 on a scale of 0-5 in August – the matching the lowest level since the President took over in December 2015.

Goldman Sachs economist called the request for further IMF funds as a “positive development”, while BTG Pactual Argentina’s chief economist Alejo Costa said speeding up access to the funds would be a major achievement for Mr Macri, considering this type of move from the IMF is seen as rare.

Miguel Kiguel, executive director of consulting firm Econ Views in Buenos Aires and a former official in the Economy Ministry, said getting the funds quicker “should help clear up doubts about Argentina’s financing”.

But he warned: “It’s good news, but the details are missing. They need to explain more how it will work.”

The warning signs of a serious economic crisis in Argentina began in April when the peso starting plunging against the dollar due to investor concerns about the government’s ability to control inflation and interest rate rises.

This prompted the government to turn to the IMF for the $50bn loan, but the country’s central bank responded by the rapid slump by hiking interest rates by 45 percent and selling billions of dollars in foreign currency to protect the peso as fears grew.

Following the announcement of the loan, IMF Managing Director and Chair Christine Lagarde said: “Given the large fiscal deficits over the past several years, the Government’s economic program is anchored on the goal of achieving federal government primary balance by 2020.

“This will be key to restoring market confidence. Improving the budgetary process and providing this medium-term anchor for fiscal policy will help to entrench these gains.

“The authorities also aim to rebuild the credibility of the inflation targeting framework, including by strengthening central bank independence and ending direct and indirect central bank financing of the government.

“These efforts are expected to bring inflation to single digits by end-2021.”