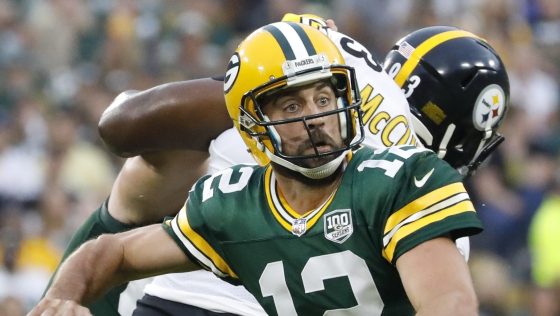 You’ll hear a lot of hype and hyperbole today about the new Aaron Rodgers deal, focusing on the new-money analysis that pegs the value at $33.5 million per year. But remember that Rodgers had two years left on his existing contract; the four-year extension makes it a six-year deal.

Based on the $39.8 million in salary and $1 million in workout bonuses Rodgers was already due to earn (I’ve left out the per-game roster bonuses), the base value of his new contract (if former teammate James Jones’ report of four years, $33.5 million per year are accurate) becomes six years, $174.8 million.

Of course, Rodgers has committed for six years, and Cousins will hit the market again in three. Which, like the Sammy Watkins–Odell Beckham comparison from Tuesday, arguably gives Cousins the better overall deal. He’ll make $84 million over the next three years (fully guaranteed) and then he’ll step up to the trough again in 2021, needing $90.8 million over three years to match Rodgers’ six-year value.

Bottom line? The Rodgers, Ryan, and Cousins numbers are close enough to prompt the same kind of reaction to Beckham’s deal: Definitely not fully reflective of Rodgers’ overall value to the team. For all the talk about creative structures and flexibility and whatnot, Rodgers did a fairly straightforward deal that ties him to the Packers for six seasons, and that gives him no apparent vehicle for avoiding the inevitability that someone eventually will be making more than $29.1 million per year at signing and/or more than $33.5 million per year in new money.

Or that, come 2023, a not-top-10 quarterback who consistently bet on himself will have made significantly more over the same six years than one of the greatest quarterbacks who ever played the game.

Rwanda's clothing spat with the US helps China